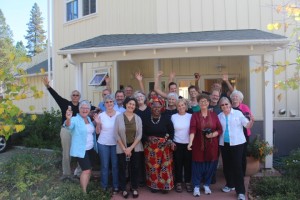 Last week in Nevada City, a team of over 20 attendees – having traveled from as far away as Brazil – participated in a week-long workshop on Aging Successfully in senior cohousing. The concept stems from a workshop in Denmark that is designed to set seniors up for success, called Study Group One. The approach is outlined in Charles Durrett’s book, Senior Cohousing: A Community Approach to Independent Living.

Participants included development professionals, architects and people who are already working on or want to start their own cohousing communities. The event was sponsored by McCamant&Durrett Architects and Sage Cohousing Advocates (SAGE), a non-profit organization igniting a movement that will liberate a generation to define a new way of aging through community. SAGE grew out of last year’s workshop, and this was its first public event and many of the board members for the new organization were in attendance.

The 5-day workshop examined a number of case studies and involved presentations on Aging vs. Saging, Cohousing Design, Cohousing Culture Change, Financing and Finding a Site. Attendees left with a deepened understanding of the current state of the housing market for seniors, strategies to address the needs most vital to this population’s physical and emotional well-being and armed with the tools to be catalysts for creating such cohousing communities in their areas. The week’s events took place at Nevada City Cohousing (an intergenerational community) and Wolf Creek Lodge (an active adult community) so that participants really had a chance to see cohousing in action and even participate in several common dinners, cooking one for Nevada City Cohousing themselves.