Cohousing in the UK 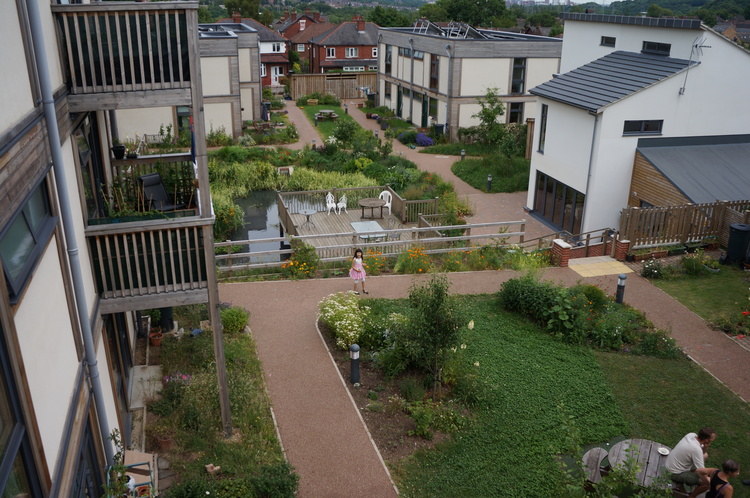 In mid-June I was invited to speak on Cohousing common house design in the UK. It was a great opportunity to visit the various different Cohousing schemes that exist in the UK, highlighting the diversity that is not as present in US Cohousing schemes.

We visited LILAC in Leeds, which was a wonderful new build scheme with an alternative ownership model. My daughter made fast friends, visiting the community garden, and racing around the central pedestrian path. There was an ad hoc celebration for a family who had been granted amnesty, which we were able to participate in. And the community meal was divine – with members of two forming groups helping with the preparation. Dinner was followed by a presentation on common house design, with more than four forming groups in attendance.

A visit to Laughton Lodge near Lewes in the south of England proved to be an idyllic day trip from London. The seaside town was the starting point of a trip to Laughton to visit a community founded by a deceased friend and Cohousing advocate, Sarah Berger. Laughton Lodge was formerly an old hospital for developmentally disabled people that has been adaptively refurbished to house 21 families. The grounds have been greatly improved upon, and the institutional housing has been transformed into generous residences with tall ceilings and ample daylight. The treehouse was a place for my daughter to make quick friends with other children visiting the community.

Near central London, we visited Springdale Gardens, a small cohousing scheme for six families. The flag lot was tucked behind existing row houses. The founding residents shared their struggles with the Hackney planning commission and the difficulties of trying to obtain approval for their buildings that were to be hidden behind taller and higher density housing that face the public street. The residents had very high ambitions for sustainability and achieved them using a very modern aesthetic. This community was formed quickly around the desire to build in the City; accordingly they did not benefit from a long forming process. This, along with some struggles with their contractor, left them feeling burnt out, and the level of conviviality was lower than other communities visited.

However, the residents with whom we met held high aspirations for future community-building endeavors.

Finally we went to Lancaster Cohousing, the location of the seminar at which I was invited to present. This was built along a linear stretch of the Lune River and had the most ideal siting for solar strategies. The community achieved a high level of sustainable construction. Their common house was well considered – their architect had been given my common house design book as a resource during the design phase. Their community had meals several times a week, and a Daily Diners club ensured that there were meals on the other days for those who wished to participate.

In addition to visiting these communities, I visited with many other nascent cohousers who were forming their communities – from Hackney to Brighton and other suburbs of London. They all had a great optimism for their projects and an idealistic enthusiasm to change their lives and change the world by building community. It gave me great inspiration to return home to finish out the last remaining months of our own construction on a truly urban Cohousing scheme in a very dense neighborhood of Seattle.