Cohousing Kicks Butt For The Women’s March on Washington 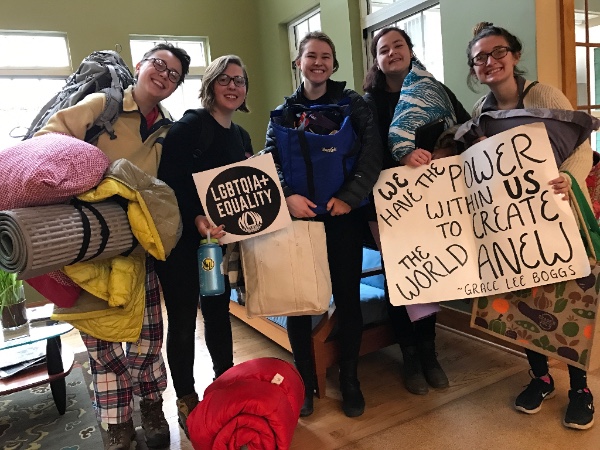 This is a re-post from MidAtlantic Cohousing; click here for all the fantastic pictures and full story!

From all over the U.S. and the world they came to DC. Singles, couples, groups. All stripes and colors.

Very young and very old. Women and men. All genders. All faiths. All traditions.

They came to march.

There are many, many exciting stories out there about The March, the marchers and the message.

This is not one of those.

This is a story about how cohousing kicks butt when it comes to bringing people together.

In particular, this is a story (very short — with photos!) about one community, Takoma Village Cohousing, in northwest Washington, DC that opened its doors and its heart to 27 people coming to DC for the Women’s March on Washington. In addition, seven households welcomed about 19 personal friends and family for the weekend so our community’s population increased by more than half!

Here’s the tale. In November, we had discussed hosting marchers among ourselves and on our email list.

In December, we took the discussion to a membership meeting. Community Team took on the responsibility. A point person networked with local March organizers, who gave tips for advertising ourselves and also directed guests our way. Other point people cooked and organized four meals, and everyone volunteered to clean up.

As a community we provided:

showers in private homes for everyone

lots of community and conversation

Our visitors told us they felt comfortable, welcome, well-fed, and actually got enough rest to make the long trip home on Sunday. Those unfamiliar with cohousing became intrigued by our community and several want to visit and explore cohousing in their own lives.

How were we able to do all this?

We were able to do this because cohousing is uniquely positioned to undertake exactly these types of large scale events. Our innovative social structure makes it possible for us to take on BIG projects.

This is what cohousing brings to the table:

High degree of Social Cohesion — We worked two years together to build this community. Now, after 17 years we continue to work together to maintain our community’s physical and social aspects. Instead of just an Annual Meeting as in most condos, we have monthly meetings of the whole community because our governance is from the ground up. Thus, we can undertake projects throughout the year with support of the whole community. We know each other well. We can call on each other for support and action for any project — The March is an excellent example of how social cohesion allows us to act.

Social Capital (Social Cohesion’s twin) — This is how the bulk of the transactions are carried out in cohousing. Wikipedia defines Social Capital as “… a form of economic and cultural capital in which social networks are central, transactions are marked by reciprocity, trust, and cooperation, and market agents produce goods and services not mainly for themselves, but for a common good.” When the proposal to house marchers was presented to the community, Social Cohesion and Social Capital made it possible for members to ask for and receive help in carrying out this proposal.

A commitment to “The common good” or The Common Weal — In cohousing, members make decisions that positively affect all members. There is a sense that the “community” matters as much as the individual. This driving force opens us up to participating in social movements beyond our own brick and mortar communities.

Organizing — If you’ve been a part of building a multi-million dollar facility from scratch, organizing is skill learned early. We are able and do organize in the larger community beyond our property lines.

Team work — In cohousing much of the work is done in teams as well as in a “committee of the whole.”

Members learn to work together and trust each other to initiate, build and complete a task. Once we decided to open our doors to those coming to The March, we immediately tasked our existing

Community Team to handle the logistics. Two point people emerged: one for finding guests and matching them with neighbors and one for executing meals.

Sharing — It’s the norm in cohousing. People share many common resources such as dinners, gardens, guest rooms, recreation equipment … even cars. And, of course our whole Common House is a shared resource. It’s not unusual to extend that sharing capacity outside the community itself.

Group decision making — Because we make decisions by consensus, cohousers achieve a high degree of cohesion AND we are able to tackle large and difficult tasks that serve the community as a whole.

Tolerance — truly … you get along in cohousing or you’re unhappy. This means that for The March — with much practice in tolerance from our daily living together — we were able to house people who came from many walks of life with many diverse ideas about The March, the politics and the purpose of the event itself. And who had many different needs during their stay with us.

The physical characteristics standard in cohousing set us apart from a typical condo or co-op:

Space for large gatherings — We have an oversized community building we call a Common House. In this case, many people staying overnight were accommodated by using the Common House facility.

Guest rooms — Built-in accommodations for people to stay in the community are standard and included in the Common House. So, having guests visit us is normal.

Kitchen facilities — We share common meals twice a week made by neighbors in our Common House kitchen. Having such a well planned out kitchen facility makes it possible to cook and serve 40+ people at a time. The kitchen made it easy to take on preparing meals for the marchers.

Geographic location — as an urban cohousing community located next to mass transit we have easy access to the city — a boon for those coming in via plane, train and car. Ditto for getting TO The March itself.

Note: We did not take on this weekend event as the entity “Takoma Village Cohousing” but rather as the concerted effort of 6-8 people in the community who then invited neighbors to participate. Through social capital, social cohesion, teamwork, good group decision-making skills etc., we organized the community members to produce this highly infectious weekend.

Several of us stayed home on the day of The March, but we knew that 60 of our neighbors – and our new friends – represented us downtown. We felt “part of The March” because of our contributions.

The day of The March may have been gray and foggy in Washington, DC but the exuberant spirits, clever signs and posters and the determination of the participants energized the crowd and the watching world.