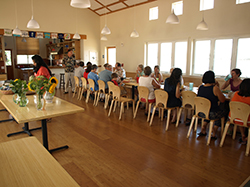 Have you ever been asked a cohousing-related question and wished you had a few nicely succinct, number-based facts to support your answer? No, stats aren’t everything and measuring cohousing’s success certainly has its deepest roots in the community-feel. But numbers don’t hurt, and they certainly can offer a hand when evaluating and presenting on the success of the cohousing movement in the U.S; as with buyers, neighbors, officials and bankers.

There will be an excellent opportunity at next month’s Cohousing Conference to help with shaping the future of cohousing research. There’s a free, all-day intensive being offered at the conference on Friday, May 29th.
CRN: Networking & Presentation of Works in Progress is an intensive led by Diane Margolis, CRN’s Director and founding member of Cambridge Cohousing. She was a member of the Board of Directors of Coho/US, chairing its research committee, and is coauthor with David Entin of the “Report on the Survey of Cohousing Communities, 2011.”

This session promises a forum for a research and writing dialogue. There will be time included for a presentation on the findings of the 2013 Survey of cohousing communities, updates on works-in-progress and identification of future research needs. Add your voice to the discussion!

Until then, here’s a preview of CRN’s findings from the 2012 survey on cohousing (you can see more on the Conference twitter feed as well):

96% of cohousing residents voted in the last presidential election

Read more about the intensive and visit their website. About a dozen people are registered for this intensive so far, you can add yourself to the list here.