A summary of the 7/12 Bridges to Cohousing Virtual Roundtable: Housing That’s Fair 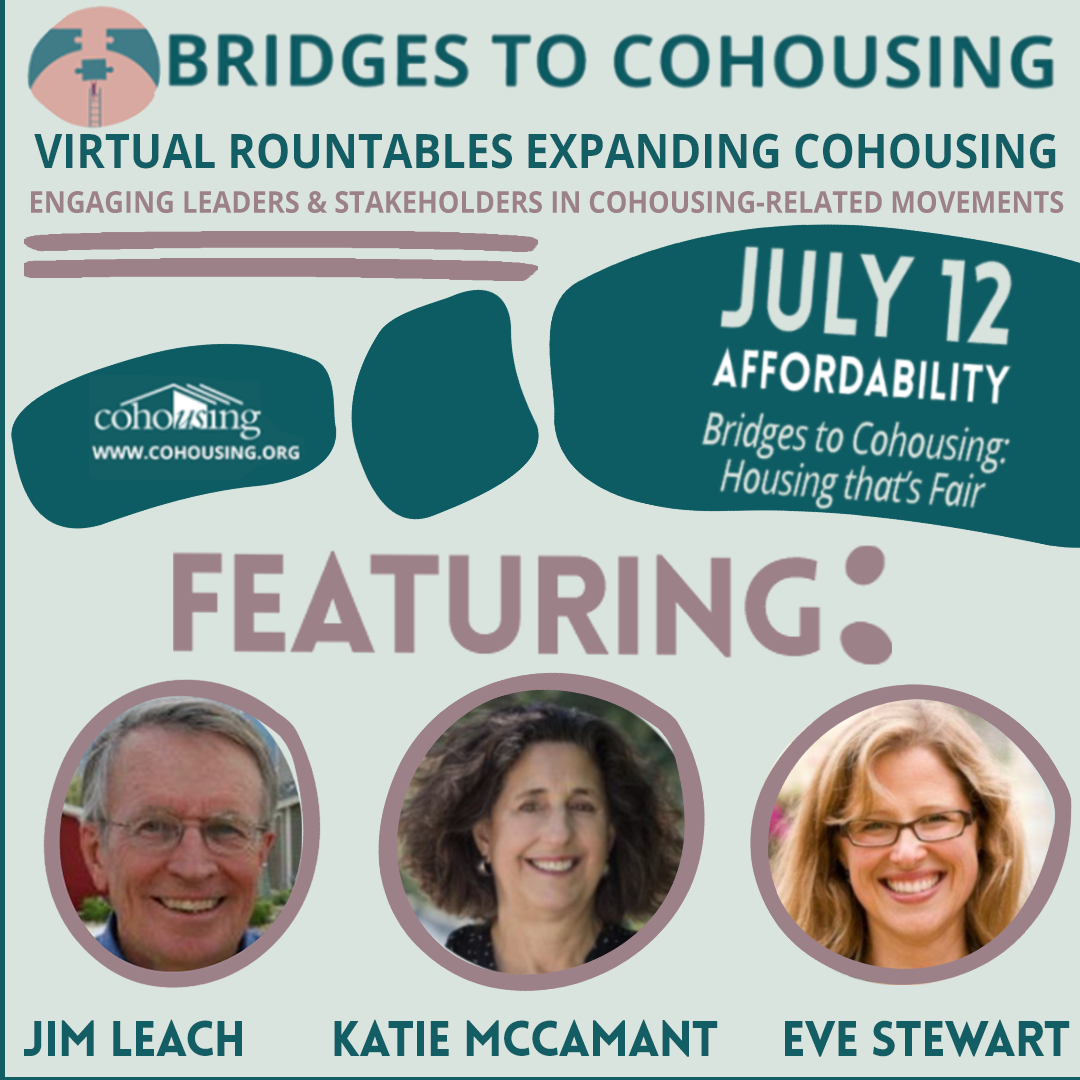 The Bridges to Cohousing Virtual Roundtable focused on Affordability on July 12, 2022 provided an honest and expansive dialogue about the opportunities and barriers for cohousing affordability. We heard from veteran cohousing and affordable housing experts Jim Leach, Katie McCamant, and Eve Stewart to learn best practices and trends to-date. During the roundtable, we also heard voices from innovators outside of the traditional cohousing industry including Lindsey Wood, Glenn Head, Josh Ruby, and Sky Blue.

Everyone agreed that the gap between housing costs and affordability has been growing disproportionately especially in recent years, and that this inherently challenges our goal of innovating “Housing that’s Fair”. Furthermore, the traditional approach to government-funded affordable housing tends to be more expensive to develop due to regulations, building standards, union labor etc. and ultimately limits the potential for it to be structured as cohousing. The design challenges presented pointed to the need to cultivate affordable housing support beyond government subsidies, and lowering labor and material costs.

Jim Leach, Josh Ruby, and Glenn Head all pointed to strategies that lower the cost of materials and labor. Leach gave an example of a Habitat for Humanity project in Boulder, CO that partnered with a local trade school to engage trainees in the development team.

Glenn Head founded the Ohana Legacy Foundation to innovate 3D-printed housing similar to what New Story has been doing in partnership with ICON where they prototyped a model for building a 500sf home in 24 hours with a 3D printer. Read more

Josh Ruby introduced the idea of a privatized model of the mutual self help program offered through the USDA . This model pays a superintendent to oversee people who spend 35 hours/week for 10 months to build their own home. Ruby has been designing homes that can be built faster and be energy efficient in a similar privatized program. He says that while no cohousing community has been built in this fashion thus far, trends show that residents tend to live in mutual self help neighborhoods longer than others because of the rapport they cultivate while building together. Ruby said this approach would lower labor costs up to 75% allowing owners without much financial capital to build sweat equity. Katie McCamant agreed that residents who want to self build could benefit from a model like this.

The strategy McCamant highlighted as the most realistic way to keep costs low is retrofitting older housing stock. She talked about a unique community in Calgary where people have bought units in a traditional condominium including buying an extra condo that they have turned into a common house. This is also happening at the Boulder Creek Community in Boulder.

While market forces have been making housing affordability harder and harder, Katie McCamant illuminated the reality that her cohousing community in Nevada City is the most affordable market rate housing in the region. She also helped dispel the myth that cohousing is only accessible for people able to buy their own home, and that renting rooms and full units is common in cohousing communities across the nation.

Leach and McCamant both pointed to smaller unit sizes as a way to reduce development costs highlighting multiple communities with studios under 1,000sf. Lindsey Wood, the Tiny Home Lady, was on the call advocating for tiny homes in this size range and below to be considered. She has builders who can create these for $200/sf in a factory.

Wood says that 67% of first-time home buyers—especially younger millennials who travel–  are interested in having a tiny home on wheels that is 400sf which, based on her estimates, could provide a single income home priced at $80k.

Wood said that half of tiny-home buyers are most interested in finding a community (or communities) where they can place/park their tiny homes making this an excellent option for communities to add more affordable housing options by renting space for tiny homes without having to pay for their development costs.

Unfortunately, Stewart explained how federal regulations such as Fair Housing laws prevent the resident-driven development common in cohousing. Petaluma Ave definitely incorporates many design elements of cohousing – as do many other affordable housing developments—but as rental communities of low income residents, the government regulations make it impossible to require participation in cohousing thus it was offered in the form of a “club”. 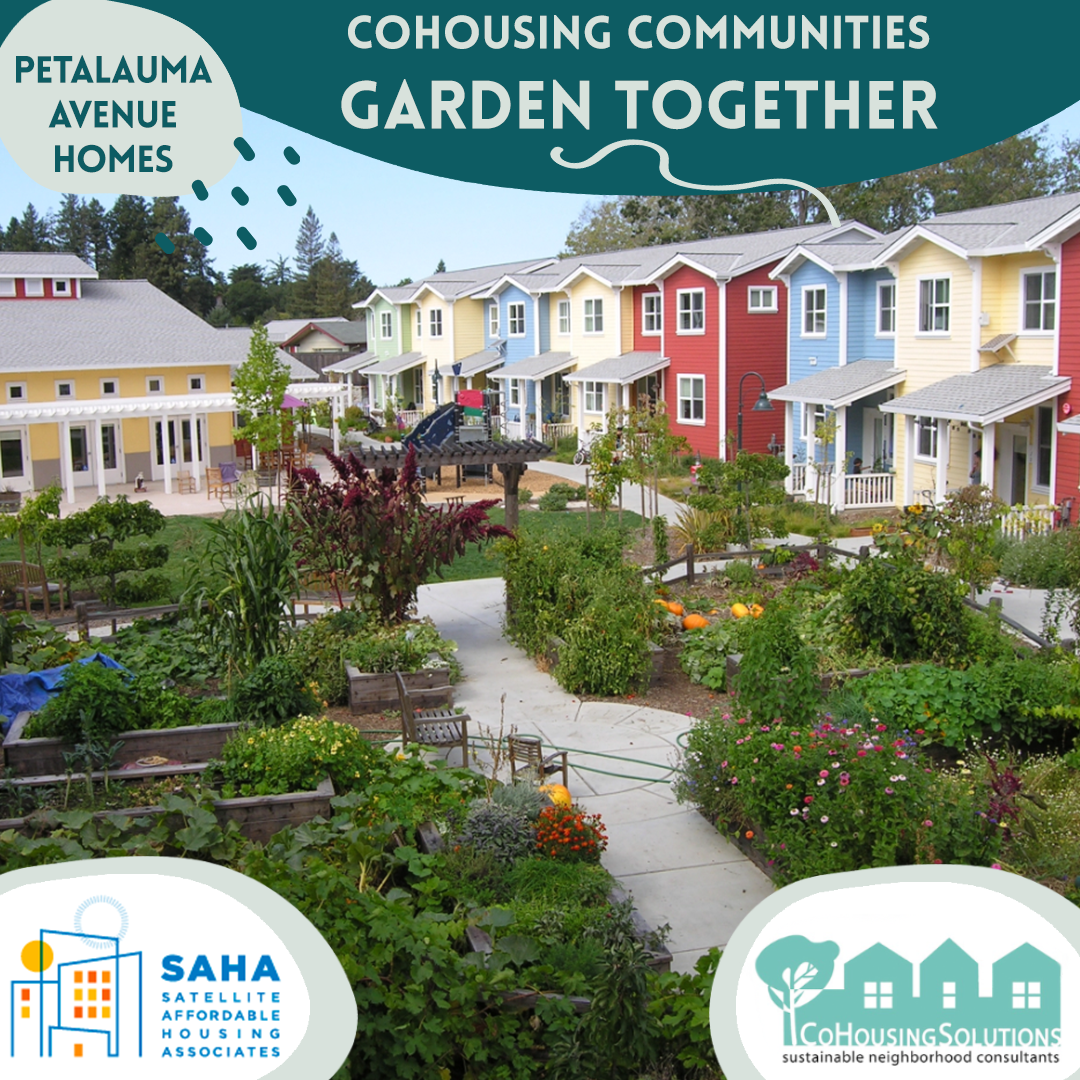 Over the years, the cohousing club at Petaluma Ave organized shared meals, cooperative childcare, a fall festival, and most consistently a community garden in the center of the development. However, Stewart said that participation in these cohousing activities has diminished over time aside from the gardening—potentially because of how busy low income residents are.

Jim Leach’s work with Boulder Housing Partners was slightly different in that they did mixed income housing with a certain % of the homes in Wild Sage and Silver Sage being designated as affordable being deed restricted to sell far below market value to those whose income qualified. This allowed the developments to have density bonuses from the city, but did not incur as much limitation as government funded housing developments.

The current paradigm of affordable housing tends to be focused on government policy and funding, and while this can come with prohibitive regulations, it’s beneficial for people interested in developing affordable cohousing to know what’s out there. Also, as in the case of Petaluma Ave Homes educating municipal leaders about the benefits of cohousing can lead to more publicly supported cohousing developments. In general, if you are interested in supporting more affordable housing, reaching out to your city council and planning board is a powerful way to take local action.

In addition to partnering with existing non-profit developers, another strategy highlighted in the discussion is to look into inclusionary zoning.  If you haven’t chosen a location for your cohousing community, you can reference the Inclusionary Zoning map to identify areas where there would be the most support for developing affordable units. Read more about federal inclusionary housing here.

There were many details of different government programs supporting affordable housing presented on the roundtable. Eve Stewart mentioned the LIHTC national tax credit program, state and local programs, land donations, impact fees, and bond measures. McCamant added to this list local first-time home buyers programs and grants that can often be hard to find.  Jim Leach suggested watching the recording of the virtual conference on Cohousing Affordability available for CohoUS partners in the recording database to dig in deeper into the nuances of what’s possible in navigating government funding for cohousing.

Sky Blue says “the same reason we are seeking belonging often prevents us from experiencing it”. This can also be said for making housing fair as the high development costs and tendency for home buyers to want to maximize their investment and equity can limit internal funding for affordability. Katie McCamant used the example of Bozeman Cohousing which has broken the mold in this by establishing an internal fund for affordable housing that has also been added to by a local non-profit and the city. That said, every time development costs increase the team has to reconsider whether allocating that funding for affordable units is still their priority.

McCamant says that encouraging cohousing owners to combine their financial decision-making with their values such as wanting to support equity and inclusion is a much needed trend. One example of this she mentioned is the possibility of transgenerational wealth transfer. This is based on the pattern that many first time home buyers do so with the support of their property-owning relatives. McCamant suggests that this could expand beyond family alone, and help to bridge aging home owners without descendants with low income families providing an economic support for the families and social support for the seniors.

Even beyond age or family size, McCamant also pointed to developing rental units as a way that communities can provide access to residents who don’t have capital for ownership. Blue asked if this presents power differentials, and McCamant says it depends on the culture of the community, but in her community residents are seen as equal whether they are owners or renters. However, she did say that it’s rare for cohousing communities outside of the affordable housing umbrella to be primarily rentals likely due to costs of high turnover.

As host of the Roundtable, I have the unique experience of having received the benefit and pioneered some of the strategies explored in this event.

For example, as a low income single Mom struggling to find affordable housing in Boulder, CO I was able to move into a rental in an affordable unit at Wild Sage Cohousing in 2011. This unit was owned by an elder, and it lowered both of our housing costs while also facilitating intergenerational social support. However, my experience at the time was that being a renter made it harder to feel connected at Wild Sage. I heard feedback from others that it was because of the high turnover of renters.

Partially as a result of that, I began retrofitting cohousing-inspired rental communities including one in Lafayette, CO and three properties in Hawaii—funded both through family investment as well as property owners who saw the value in supporting more intentional rentals. While these communities stray from the traditional cohousing model, they have much in common and pose a short-term solution especially appealing to low-income and younger residents such as students or millennials who tend to live in places for less time.

The long-term vision some millennial real estate pioneers like myself have is to develop membership-based community networks where people can buy into the network and live in various locations, including mixed-use properties where onsite revenue generation can help subsidize housing costs and provide jobs for residents. In addition to being the Program Director for CohoUS, I am in the early stages of prototyping my newest community property called HIVE Hawaii which has a retreat business offering short-term community living, and intentions to develop a microvillage nextdoor for retreat staff and members based on this model.

I’m passionate about cohousing as it is the most established replicable model in the world for building thriving communities, and I am inspired to be part of helping to grow the movement to have even greater impacts that increase cohousing affordability, sustainability, and inclusion. This initial 3-part Bridges to Cohousing series as just the beginning of expanding perspectives about cohousing, an opportunity to hear different perspectives from leaders within cohousing and adjacent movements, and to uncover trends that are most relevant for the movement and CohoUS programming moving forward.