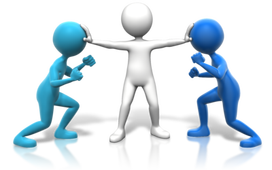 Read Alan’s first blog on this topic Do you proactively de-escalate ‘diverse’ personalities in your life?

I’m facilitating a retreat later this fall about dealing with diverse personalities in Arcosanti, AZ. I’ve been asked by a few people about what the “strength-based” approach I’ll be using is about. Risk and protective factors are a little jargony and wonky, but important concepts when dealing with disruptive and violent behavior in an organization, community – any group, really.

I formerly worked in the positive youth development and domestic violence prevention fields. Parts of my jobs involved training in strength-based cultural competency, which is how the retreat will be presented.

First I’ll talk a little bit about the differences between the two approaches in the context of disruptive behavior.

*History of tantrums or angry outbursts

*Resorts to name calling or cursing

*History of being bullied

*A pattern of violent threats when angry

*Use and abuse of alcohol or drugs

*Blames others for personal problems

*Desire for power and control

*Poor peer relations, is on the fringe of the community

*Lack of community norms that set boundaries on behavior

*Destruction of property within the community

The response to dealing with risk factors is known as secondary prevention (How do we prevent a person from being disruptive a second time) which features “victim blaming.” That’s a consequence of the law enforcement containment approach.

In the system, offenders from school bullies to domestic violence perpetrators are managed or contained by several agencies, groups or individuals and is a very labor and time intensive system.

This “out of sight, out of mind” method, finger-points and isolates, but does not solve the ultimate problem, which may be deeper and enabled by community risk factors.

All of us have had the top-down, more authoritarian model pounded into us from the age of five.

Those habits are hard to shake.

What can we do to prevent disruptive behavior or violence from happening at all?Protective factors provide buffers from the risks which may be associated disruptive or violent behavior. These factors exist at various levels.

Protective factors haven’t been studied as extensively as risk factors because they are difficult to measure.

In the context of community, it takes a village to create an atmosphere and culture that nurtures protective factors in positive directions rather than negative ones.

The strength-based protective factor approach is one that is more easily implemented.

Rather than trying to ameliorate, in a reactionary way, individual risks which may or may not cause a particular disruptive behavior a few protective factors can be developed that that buffer against many risk factors.

*Community establishes boundaries, expectations and norms that emphasizes the whole and not the individual

*Community participates in activities that support its “higher purpose.”

In the outside world system, it brings together victims, other stakeholders, the affected community to transform.

Most community settings don’t have punishments in the strict sense and “enforcing” on disruptive or violent people is difficult, if not impossible.

In the context of community, there likely is a looming or approved decision that takes from the whole to benefit a few that creates angst.

Any consequence leveled in a community likely involves many disruptive event contributors who must take ownership of their roles as opposed to blaming others:

*Target (who likely is directly involved)

*Bystanders (members who may have witnessed the disruptive behavior)

*Intervener (bystander who actively tries to calm down the disruption)

The Arcosanti Retreat will address how all community members can dig into their pasts and begin the work to unpack previously learned behaviors and how to better respond to disruptions as we find ourselves in various roles.

What is “higher purpose”?

My cohousing neighbor uses the analogy about community culture, “What if we were all accountants?”All being accountants is a common characteristic, but not a higher purpose. If all the accountants as a community decided to provide money management for senior citizens or help low income people fill out their income tax returns, that would be a higher purpose.

No matter what age, participation in “religion” or organized higher purpose is the most effective protective factor that buffers against risks. Another is having a strong ally who is not a family member.

As for myself, the reason I’m committed to this process is I’ve recently been involved with a huge conflict within my cohousing community. Dealing with diverse personalities is the “elephant in the room” that gets shoved in the closet, only to emerge later in another room.

The retreat leads participants through a process that enables each to know themselves better and how they can better understand others through getting to know them better.

The retreat and three sessions will be very interactive, hands-on and also be quite entertaining with a big dance performance at Arcosanti and plenty of time to network, meet new people and get to know existing acquaintances better.

My next story will address how cultural competency works hand in glove with developing protective factors in community as primary prevention against disruptive behavior and escalating violence.