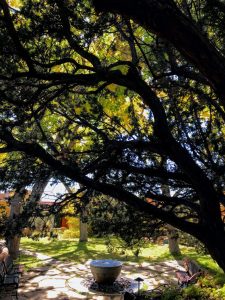 The Commons on the Alameda, initiated in 1991, is one of the nation’s first cohousing developments. The major goal of The Commons in Santa Fe is to infuse a sense of community into all aspects of daily living. It also respects the privacy and individual needs of residents. Completed in 1997, The Commons is comprised of 28 residences and a community facility on about five acres located within the Santa Fe city line.

The overall design of The Commons was greatly influenced by the books of architectural pioneer Christopher Alexander (e.g. A Pattern Language) and partly modeled after the traditional Compound style found in older Santa Fe neighborhoods. The Commons is situated in the suburban westside of Santa Fe, just within the city limits. The first houses at The Commons were occupied in 1992. The 28 lots, bought by a developer who was one of the founding members and was a resident for the first decade, were sold gradually over the course of 6 years, and each owner has used an architect and builder of his/her own choice. As a result there is visual variety, although all the houses are compatible and can be described as Southwestern-style. Building guidelines in the bylaws ensure that all houses meet a general aesthetic standard, do not infringe on the solar gain of other houses, and have some areas that communicate with the placita to encourage neighborly interactions. The Architectural Review Committee must approve a homeowner’s plans before any construction or remodeling begins.

The houses are clustered around four open green areas called placitas (little plazas) and a large main plaza with a Common House. Residents designed and implemented the landscaping. We follow a policy of Integrated Pest Management. No auto traffic occurs within the community; all parking is around the perimeter. A main parking lot next to the Common House accommodates visitors. An orchard area is located in the SW corner.

Every original unit owner contributed money towards the construction of the Common House in their first year of membership in the Homeowners Association, so each owner owns 1/28 of the Common House, and shares the benefits and the costs of using it. The building contains the community kitchen, dining room, a meeting room with a fireplace (parlor), an exercise room, a children’s room, two bathrooms, a utility room, a laundry room, and three guestrooms. Residents can reserve the Common House for events or gatherings, so it is not uncommon to see a yoga or theater class or a meeting of a local organization. Activities in the Common House are subject to some guidelines; smoking is not allowed, and we have a policy of keeping the building free whenever possible of chemically based fragrances. Maintenance of the Common House is overseen by a resident who has taken on the role of Common House Manager.

The Commons is governed by participatory management, every resident has a voice in how we life here. We meet the second Sunday of every month from 6-8 pm for a Business Meeting in the dining room. Residents volunteer for the roles of Facilitator, Timekeeper and Vibeswatcher (the latter alerts the group if any physical or emotional needs need to be addressed). All new proposals should first be introduced at the Board of Directors Meeting the Thursday before the Business Meeting. The meeting is usually around 7 p.m. in the parlor. Each meeting has an agenda, in which proposals are decided on and minutes are taken. Once a year in January we host an Annual meeting, to elect a Board of Directors (including President, Vice President, Secretary and Treasurer), to amend bylaws if necessary, to establish a budget for the following year, to reflect on the year past and plan for the next year. The budget is the basis of our monthly assessments.

We are committed to consensus decision-making so that approved proposal (for a purchase, activity, or policy) is accepted by every participant. All views are listened to and new ideas are incorporated into the proposal as much as practicable. Anyone who believes that the proposed activity or policy would be detrimental and injurious to the community may block the proposal from going forward. Discussion can often be lengthy to ensure that everyone has been heard and that all concerns are addressed. Decisions requiring an expenditure of $1,700 or more must be approved at two Business Meetings.

Concerns requiring detailed research and discussion are managed by small groups. Committees are established for ongoing concerns and Task Forces handle short-term issues. They are composed of anyone who participants in regular meetings on the issue. Committee decisions are usually in the form of proposals to the community, to be presented at a Board of Directors Meeting and possibly at a Business Meeting. Proposals may be rejected, approved, revised or sent back for changes. Some committees focus on fundamental systems of The Commons (e.g. Work, Kitchen, Grounds). Others deal with potential problems (e.g. Pets), or issues that need regular monitoring and research (e.g. Integrated Pest Management). The Process Committee convenes community meetings, facilitates conflict resolution, recommends workshops or other ways to evolve as a community. A full list of committees and their missions are in the guidebook Life at The Commons.

Because business is not the only matter that needs attending to in a community, we have a Community Meetings on the fourth Sunday of every month from 6-8 pm. Not a venue for problem solving or decision-making, but for listening to each other and getting to know more about each other. At this meeting people discuss personal or community issues, or anything else that’s on their minds. We find that the kind of deep understanding we often achieve in the community meeting strengthens the bonds of community, and also as an added benefit, helps us to make better decisions in the business meetings.

All adults residing at The Commons for 30 days or more are expected to contribute work hours in service to the community. Many activities count for work credit, including gardening, Common House maintenance, creating a newsletter, babysitting. You may work alone or with a team, on a regular schedule or whenever you fit it in. The Work Committee posts information on current tasks to address. Group projects usually occur during schedule “work days” (on the Saturday before a Business Meeting, usually the 2nd Saturday of the month). Homeowners are expected to contribute 8 hours and renters 6 hours of community work per month, including one kitchen duty per month. Each resident tracks their own hours in a logbook. Work hours are tabulated semi-annually and work hours not completed are assessed to the homeowner at the rate of $16+ per hour.

Dinner is served in the Common House every Monday and Thursday night at 6 pm. The menu/sign-up sheet for each dinner is posted several days ahead of time on the foyer bulletin board by the dining room. Residents who wish to dine sign up themselves and any guests they’ve invited (preferably at least a day before the meal). Meal charges for each household are included in the monthly homeowner’s assessment bill. We serve organic meals as much as is practicable.

A crew of four or five residents cooks, serves and cleans up each meal. Every adult resident is expected to work one kitchen shift per month, signing up as Head Chef, Assistant Chef, Set-Up, Clean-Up or Mop-up. The kitchen is managed by Commons members who stock the kitchen, handle scheduling, and perform many other tasks to keep the kitchen running smoothly and efficiently.

When houses are available for sale they are posted on santafecohousing.org Homes for Rent/Sale. Many owners rent out rooms or attached casitas; information on available rentals may be posted on a Common House bulletin board.

We welcome visitors to The Commons. Occasionally we receive visitors who are interested in learning more about cohousing life, and we encourage them to stay with us and join us for community meals. Please email our concierge at thecommonsonthealameda@gmail.com for more information. Visitors should be conscious of people’s privacy when walking around The Commons; however, a visitor should not be surprised if a resident asks them who they are and whom they are visiting.

There are no reviews yet.

Please login to leave a review.