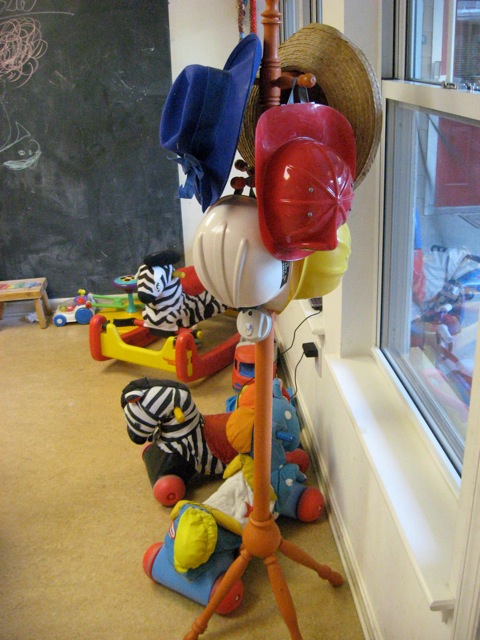 Communities designing their common houses often ask about what they will need. What do people really use? What kind of storage is needed and what will go in it? Is an office necessary and for what? They don’t know about storage for 8 snow shovels or 6 different kinds of brooms and mops.

When our water bills doubled at Takoma Village, we realized that in less than 6 years our population had doubled in size. And it continued to grow as households expanded from one to two and three and four people.

That expansion meant more people donating equipment and more money to buy it — an up-scale gas-fired outdoor grill, a freestanding basketball hoop, a sun canopy for those grilling at BBQs, etc.

All well and good, but the big picture is the increase in care-taking tasks and in the need for storage. Who is responsible for ensuring that the cover is on the grill and the gas canisters are full? Who ensures that the sun canopy is folded correctly so it can be stored in its case without being damaged? And who knows how to do it?

Care taking is forever and requires an identified responsible person

In the third year after move-in, a resident wanted to make a donation in memory of her son. The community chose a freestanding basketball hoop. A place was found for it in the parking lot. But she didn’t play basketball and it never had an identified caretaker. It was used regularly when there were teenagers and adults who played. But that age group cycled through, and it was taken care of only intermittently. It was hit by trucks and generally left to rust. After 14 years it barely stands.

It needed to be kept in good repair—used or not, for future residents.

When most of the under-six children had grown out of the playroom or moved away, there was a push to restock it for older children. Booster seats and toddler toys went to the thrift shop. Books were replaced at elementary school level and above. Many more things, like dress up clothes, were on the chopping block before objections were raised. A year or so later we had babies and toddlers again who quickly needed those booster seats and we had to buy highchairs. There were no dolls. The learning to walk toys were gone.

We have always had a person in charge of the playroom, but we hadn’t planned for the rooms being used in cycles — the toddlers coming in waves. We needed the room when few children were playing there just as when it was too crowded. It is as necessary as the laundry room.

Along with each piece equipment comes the need for storage. When people wanted to purchase a new gas grill, the question was not will anyone really use it, but where will it be stored? It was larger than the much used old one. Indoor storage was impossible because moving it in and out of the basement would be too cumbersome, and it did have canisters of gas attached to it. Where outdoors? If in a grassy area it would be difficult to move to the piazza where our old one was most often used. Would anyone use it beside the raised garden with the compost on the other side of a not-very-tall wall? It was too large to leave in the piazza all the time. And for BBQs when it was used for hours too smokey and hot.

We finally found a good place and a person to care for it. Then she left one early spring when no one was thinking about the grill or who would ensure that it was used and cared for properly.

Now, before every large purchase, we have someone who assumes care-taking responsibility and designate a place to store it. It isn’t as organized as that sounds but voices are there asking the questions and they are more likely to be addressed before something is acquired than afterwards.