Intentional Communities: Informing the Next Generation of Land Use Law?

By: Robert Boyer, University of North Carolina at Charlotte October 25, 2015 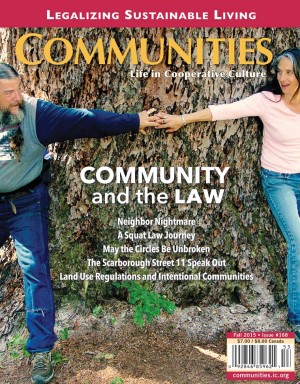 [Editor’s Note: Reprinted from Communities Magazine by Robert Boyer, an Assistant Professor of Geography and Earth Sciences at UNC Charlotte. Robert has researched cohousing and ecovillage initiatives around the world, and was an enthusiastic participant at the 2015 National Cohousing Conference.]

Throughout the last century, multiple public and private institutions have distanced citizens from
the design and construction of their future homes and discouraged community-oriented design. These
overlapping financial, regulatory, moral, and industrial structures— detailed below—are among the
greatest challenges to forming an intentional community today. In addition, their reinforcement of low density,
automobile-dependent, sprawling development patterns has contributed indirectly to global
environmental problems and the erosion of social capital in the US since the end of World War Two.