My Path to Cohousing 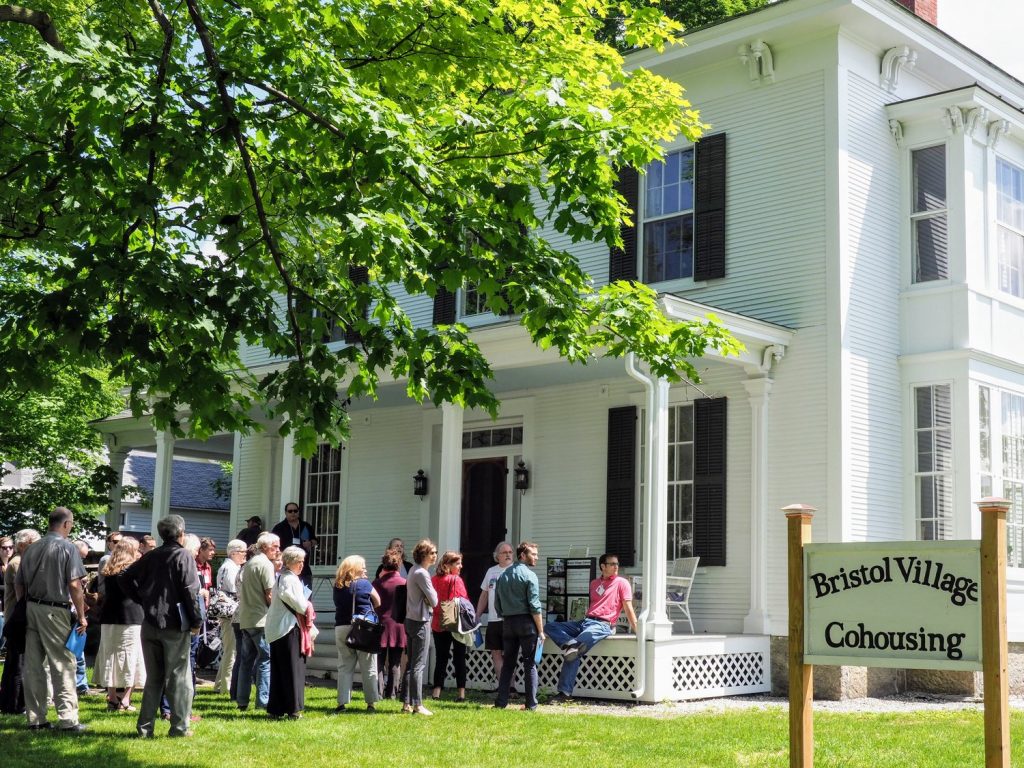 For over 20 years my family lived in Vermont enjoying our walks in the woods but with little contact with our neighbors. After our three kids grew up and moved away, Meg and I started thinking about finding a smaller home.

As we explored, we saw a large historic house for sale in a community just 20 miles south. Only two families had lived in that building for over 150 years. It was beautifully preserved but with a recent modern kitchen added on. Built in 1861, located in the center of the village of Bristol, the house was featured in the 1995 film The Wizard of Loneliness. Amazing how many current Bristol residents said they were extras in the movie.

My partner, Meg, fell love with this house. It was on the market for years too large for most families, so the price kept going down. Then we discovered two adjacent buildings were for sale: a four-plex and a large house which were in disrepair.  The large backyards on both properties added up to over two acres. I mused: what about cohousing?  We could have the home of Meg’s dreams if we shared it with other families as our common house.

Thus, the original conception of Bristol Village Cohousing. We managed to mortgage the properties with a bank right down the street, found partners, and together began the process of planning the many steps in developing a cohousing community.

The idea for developing cohousing did not appear out of the blue. I had long been interested in some sort of communal living for years. My first experience started when, from the ages of nine to 13, I went to a co-ed camp in Vermont. One hundred campers doing our assigned chores and playing together with so many activity choices. What a great way for us all to explore our passions and learn to work together.

My next communal experience came in college when I lived in cooperative housing off campus. Twenty of us renovated a big old house including putting up our bedroom walls, and then made a job chart with each of us having responsibilities for cooking and cleaning for our shared meals and keeping some order in the house. In our community meetings, it became clear that everyone had a say, although sometimes resolution could be difficult without a defined decision-making procedure.

After 20 years working in book and magazine publishing in Manhattan, and editing a community newspaper in Brooklyn, my love for camp came back with a vengeance. Meg and I decided to start a Vermont family camp. Twenty-eight years later it is operating as a cooperatively run, non-profit, retreat and family center with multiple weeklong programs on a 700-acre site (www.cgcvt.org). After each week of camp, families could be heard asking “Why can’t we always live like this?”

My answer has been, “You can. Check out cohousing.” You can have your own private home, and yet have a community where you can work together to manage and enjoy your common facilities.

We first learned about cohousing when we moved to Vermont and joined a large group looking to start cohousing in Burlington. Then we got a taste of how an existing community worked by staying at Ithaca Cohousing when visiting our daughter at Ithaca College. We shared a meal there and were able to meet Liz Walker, the co-founder of Ithaca Cohousing who described how it began in Scandinavia and how the idea was brought to the U.S. by Chuck Durrett and Katie McCamant who developed communities and wrote books about them. My interest was piqued.

In the following years, I attended several of the bi-annual conferences hosted by the non-profit CohoUS (www.cohousing.org). I sat in sessions offered by architects, developers, and existing cohousing members, but I learned the most on bus tours when we would visit four or five cohousing communities on each trip. I loved everything I heard: the combination of privacy and community, the opportunity to self-manage by working and making decisions together, common meals, common gardens, a more sustainable way to live.

I thought someday I would eventually find the cohousing development where we would make our new home. But instead, when I saw the opportunity to build cohousing in Vermont not far from where we lived, and we could share that incredible historic building as our common house, it was too good to be true.

From our original conception in 2013, we found partners, and with the indispensable help of a cohousing facilitator, Mary Kraus (www.marykrausarchitect.com), developed guidelines on how to move forward in a constructive and sustainable way. We hired a good lawyer, formed a design committee, and started to work with an architect, an engineer, and a builder, as we marketed to engage new members.

Finally, in 2016, after securing a construction loan from a local Vermont bank, we started to renovate the buildings already there and construct new ones. Within a year, 14 homes were move-in ready, and soon we were fully occupied. Harkening back to my days in my college coop, where we sometimes got stuck moving forward in meetings, I wanted to make sure we had effective cooperative governance techniques in our cohousing community. A group of us started to meet regularly, and we asked the non-profit Sociocracy for All (www.sociocracyforall.org) for help which has benefited us greatly.

Recently we hosted a 5 year anniversary celebration with music, food and tours. Over 200 curious local folks came to see what we are all about and who knows, some of them will choose to live in cohousing like me.