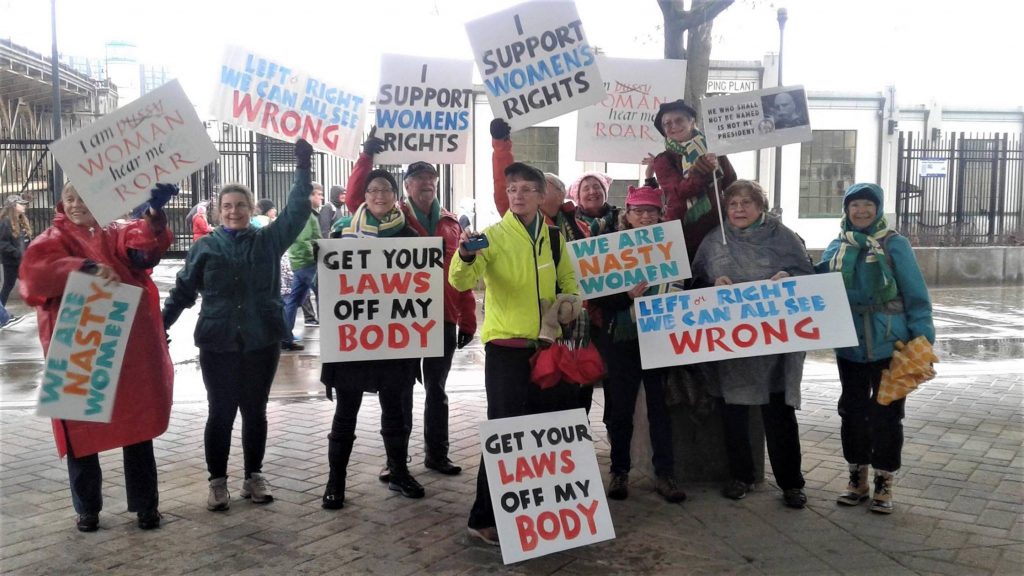 The benefits of intentional community can sometimes come as a surprise – especially when the community is still in formation, not yet even living together. When members of PDX Commons learned about the Women’s March on Washington and all of the sister marches around the globe, including one right here in Portland, there was a strong spontaneous desire of wanting to gather together, joining forces to march with our community identity: At PDX Commons, we stand for kindness, compassion, fairness, justice, equality, human rights for all.

As January 21st approached, in a flurry of emails, we organized our group, accepted the volunteered services of one of our Wait List folks to make wonderful signs for us, and watched the weather forecast warily. Fortunately, Portland’s unusually problematic ice and snow melted away, but what came behind it was rain – more typical for Portland winters. As we met together to walk across the river (joining throngs of marchers) to the rally site, we were in all kinds of layers of jackets, ponchos, boots, hats, and umbrellas, ready to deal with the downpours that were already in progress.

Many of us had never participated in a major demonstration march like this – others hadn’t marched since the turbulent 60’s – so the power of solidarity with this peaceful human mass of perhaps close to 100,000 people was amazing, as was the camaraderie of marching with other members of our own community. It was truly an experience that will remain with us for a long time – an initial clear action that we could take to resist the damaging policies of the new administration.

When I (along with my husband) decided to join forces with PDX Commons last year, I had no idea that I’d be marching with our new friends among thousands of others on a cold wet January day. This community stands behind our values, and is willing to hit the streets to demonstrate that. PDX Commons is for real!

As a child of the 60s and a policy director for the San Francisco Department on the Status of Women for 20 years, it was pretty much a no-brainer that I would go to the Women’s March. But little did I know what a profound experience it would be.

We came up with a plan to meet at the foot of one of Portland’s oldest drawbridges. Some of us got there early and watched and watched as the growing group of PDX commoners came across the bridge with pink hats and signs and smiles on their faces. For me, I could not get the Harry Potter Voldemort theme “He who can not be named” out of my mind, as even the name of our new President provokes strong negative reactions in my body that I cannot escape. What an amazing sight it was to watch a major bridge being taken over by women, marching to the March! And the signs – OMG they were everything you would want – colorful! Creative! Beautiful! Original! And on point.

Soon twelve of us we were marching to the destination. The crowds became so intense that getting through them together became a challenge. But oh what fun it was to be marching again; this despite being short and not liking crowds. Diverse women squeezed through with strollers, and older women came with canes and wheelchairs, men were numerous. The crowds parted soon to be refilled with the masses that kept on coming and coming! The energy was intense, singing started, and it felt so good to be sharing a voice of song with thousands upon thousands! We stuck together despite the intensity of the crowd. At one point, I looked up and saw some of our male colleagues proudly proclaiming their solidarity it brought such a smile to my face!

The peaceful gathering of so many protestors, amazing in itself, to the horrors of what’s to come was such a joyful respite from the pall that had overtaken me since November 8th. Even my cold toes were hardly noticeable! Walking together with our PDX Commons name on the back of all of our signs created an incredible sense of come camaraderie I have not experienced for a long time!

While I know only too well that marching alone won’t prevent upcoming travesties, it was so endearing, enriching, and loving to be surrounded by women and men young and old, black, white and brown. Born today was a movement that’s been in the making since the sixties! Well, I’m not going to thank “He who shall not be named” for his contribution to this, but I do think it’s a unique time in history, and it gave us hope that we shall overcome the next four years.