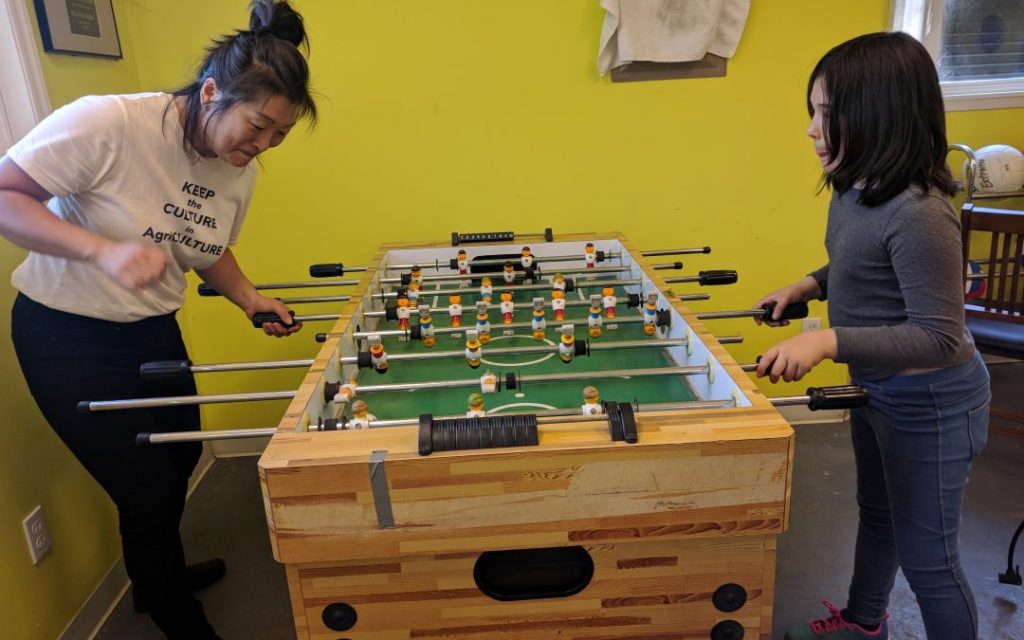 For most of my daughter’s life she has known about cohousing. We moved in when she was 9. But we had been planning it since she was 3. During construction she asked me almost daily whether she was going to (fill in the blank) or tell me what she was going to do when we moved into cohousing. It was a time of hopefulness and anticipation for all of us.

When we moved I could not have imagined her delight when she heard kids in the courtyard. She would drop everything and run to the window to see who was there, then she would holler “I’m going down to the courtyard” and run outside.

As an only child, and a high extrovert, she craved having kids around. And now she had it 24/7. And that was an adjustment for her.

While at the outset it was great, there were certainly conflicts over time.

She would come home crying, telling me how someone was being mean or hitting her. Or she would have a squabble with a neighbor while playing after community dinner and storm out of common house shouting that “everyone was stupid and she was never coming to dinner again!”

And the reality is these conflicts and outbursts settled down and the relationships became more reminiscent of siblings. The older tweener whom she had known since birth was now annoyed by her existence because she was 15 months older and too cool to hang out with my daughter. The younger girl across the hall would one day be her bestie and the next week be an annoying pest.

But one of her favorite kids in the building is a 6 year old…this friendship has been 3 yrs in the making- amazing for a girl who had previously hated babies and little kids. It’s so sweet when he comes knocking at the door to ask “can Ella play?” And there are other children who come over to play Minecraft or Legos. And when its time for dinner I can tell them it’s time to wrap it up and they toddle off to their homes. No hassle to schedule play dates or coordinate pickups.

Parenting in cohousing can been difficult at times- everyone has slightly different styles and values. But in a recent business meeting we each shared the best and challenging aspects of parenting in community. Without hesitation many of us shared the best being the variety of parenting styles, the variety of adult role models for the kids, and that some other adult has our back when our child needs an adult figure to tell them to cut it out, offer advice, or just give them a hug.

Grace Kim is co-chair of this year’s Cohousing Conference and a founding principal of Schemata Workshop. Grace spoke in Vancouver at TED 2017 on the topic of cohousing. For four years, Grace served on the board of the Cohousing Association of the US. She is also a founding member of  Capitol Hill Urban Cohousing.