Six Degrees of Separation…or is it 4.26 degrees? 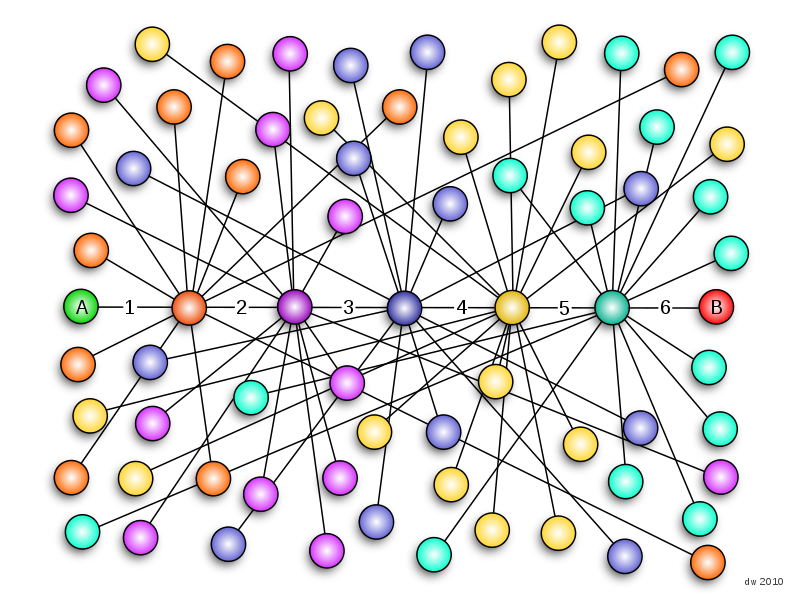 The six degrees of separation theory was first proposed in 1929 by the Hungarian writer Frigyes Karinthy in a short story called “Chains.” Six degrees of separation is the idea that all living things and everything else in the world are six or fewer steps away from each other so that a chain of “a friend of a friend” statements can be made to connect any two people in a maximum of six steps.

In the short story, Karinthy’s characters believed that any two individuals could be connected through at most five acquaintances; the characters create a game out of this notion. He wrote:A fascinating game grew out of this discussion. One of us suggested performing the following experiment to prove that the population of the Earth is closer together now than they have ever been before. We should select any person from the 1.5 billion inhabitants of the Earth – anyone, anywhere at all. He bet us that, using no more than five individuals, one of whom is a personal acquaintance, he could contact the selected individual using nothing except the network of personal acquaintances.

This theory has continued to be discussed in social science circles as well in popular culture. The game “Six Degrees of Kevin Bacon” was invented as a play on the concept: the goal is to link any actor to Kevin Bacon through no more than six connections, where two actors are connected if they have appeared in a movie or commercial together.

Recent studies have presented an idea that with popular social networking platforms such as Facebook and LinkedIn, the steps it takes to connect two people has decreased to 4.26 degrees.

You might wonder, how does this relate to cohousing? In the continued talks of how to grow the cohousing movement, the leading question often is ‘how can we create more of them?’ To create more of them, we need more people to know about them. It sounds so simple, yet is a huge undertaking. So how can we do it?

The most basic way we can educate people about how we live is to use every little opportunity to tell them.

When someone asks me where I’m from, I don’t simply say Colorado. Instead, I tell them that I live in a cohousing community in Boulder, Colorado. If I get a response such as “oh, what’s that?” I tell them my short elevator speech, which goes something like this:

“It’s like the old-fashioned neighborhood that I grew up in. We all have private homes, but we have shared spaces as well. We have monthly celebrations or gatherings of some sort, and we eat a meal together a couple of times a week, so I know all 80+ of my neighbors really well. It’s a great place to raise kids as we really support each other, and we can collectively live a little more consciously on the earth by sharing resources. We can easily reuse or upcycle household items and clothing, and and we can car share among the 34 households.”

We are a small part of the larger world populated by 7.6 billion people and we are all connected by some degree. Though cohousing may not be for everybody, wouldn’t it be fantastic if everyone knew that it is an option? Share your story, help grow the cohousing movement. Together we can…

Create community, one neighborhood at a time.