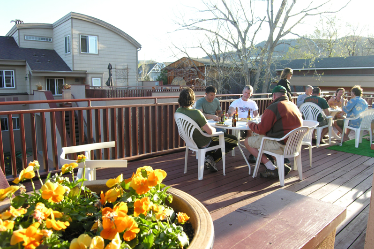 As everyone currently living here at Nomad, we understand that owning a home here is a lot more than just having a deed of trust in your name. Cohousing and community in general is larger, sometimes much larger.

The desire for community is as old as humans have been scratching out survival on this planet. For hundreds of thousands of years, it was the extended family or tribal unit that allow us to survive. As our number grew, we formed villages and eventually small towns where protecting each other required us to collaborate to provide for food and protect us from those who wished us harm.

Now in the 21st century the majority of Americans have lost many of those traits and have been raised to believe that we are all individuals and it is necessary to climb over others to improve our standard of living. It is rare for neighbors to know one another let alone collaborate for the larger benefit. The magic of cohousing is that we have worked to bring back some of those long-buried arrangements for the purpose of creating a living unit that balances individuality with community. For many it is this delicate balance which attracted groups to band together and take on the multi-year effort to find land, design, fund and build their cohousing neighborhoods.

For those who came later they had the benefit of seeing what they were buying into and meeting their future neighbors before making the big decision to purchase their home and join the neighborhood. They typically discover that there were pre-existing agreement, standards and systems in place create by earlier residents. Not that they were set in stone but that they had been created because the residents felt they were useful.

So, what does it take to live successfully in a cohousing neighborhood? I offer a start to this discussion with the following. My experience in living in a cohousing community requires at least three qualities: generosity, tolerance, and a willingness to face or own issues.

Being generous often shows itself in giving more than you take. Going the extra mile even if not asked just because it makes life in the neighborhood better. This could mean cooking something special for others, shoveling a walkway that you may not use often, lending a hand when you are able, sharing resources, or keeping an extra eye for neighbors old and young.

Tolerance appears to be a perspective sorely lacking in our larger society but also rears its head within our interactions as well. Despite our many similarities we are often quite diverse. These differences can range from modes of communication, political or social perspectives, parenting styles, family structures and rules, economic backgrounds and a host of other things. When we are brought together it is not unusual for some of these differences to be challenging. I have found that holding an umbrella of tolerance over our relationships makes for a much easier and positive environment within which to live.

Veterans of the communities movement often claim that living in community can be a fiery crucible of personal reflection as we are faced with our own issues mirrored back to us by those surrounding us. I have been known to use the quote that cohousing is the longest and most expensive personal growth workshop you will ever take. However, now that I have successfully raise two powerful daughters into adulthood, I would wager that living in community might come in a close second only to parenting.

Living in community and cohousing specifically is not for everyone and may not be for anyone for their entire lives, but despite the challenges, for me it has proven to be well worth the effort.

I look forward to hearing your thoughts.