What’s it Like to Grow Up in Cohousing? Fairies and Friendship 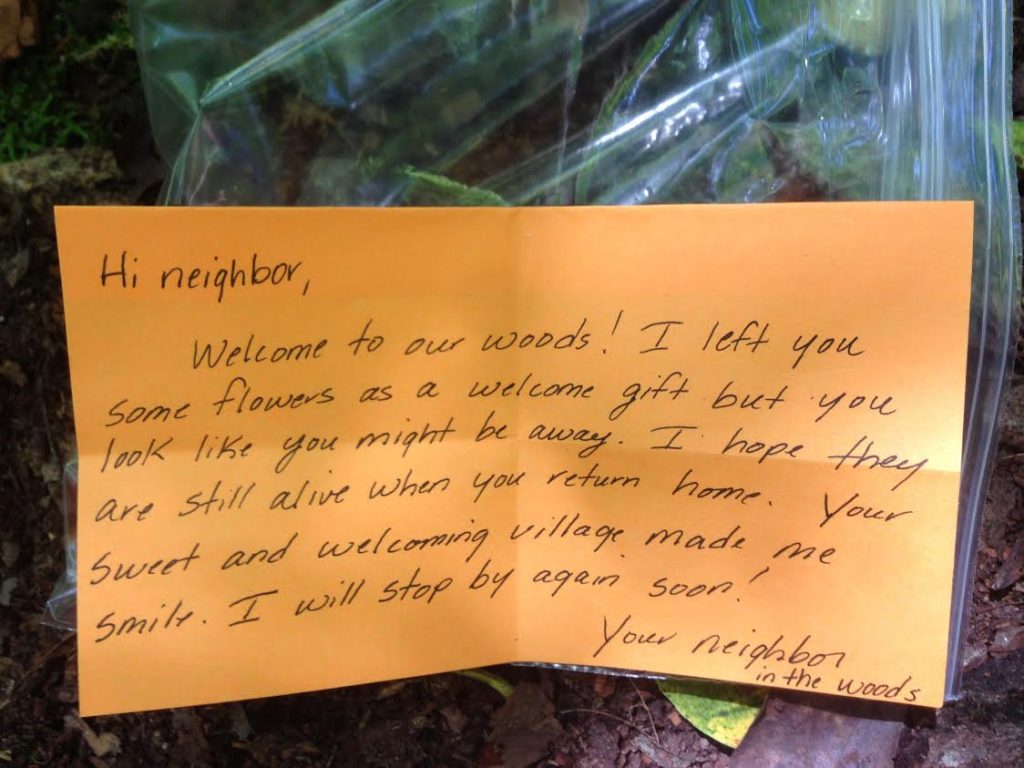 One of my favorite pastimes is to build fairy houses in the woods with my friend Ally. We design and build houses out of materials we find in the woods- like pine cones and bark. We’ve become rather skilled at it and have been working on a mini cohousing village called Redwood Village. It is complete with a common house and several other structures. Ally and I have been improving this particular fairy village for nearly a year, and when there is nice weather, we go out and work on it. Last weekend, we got a surprise. I was walking my neighbor’s dog Russell in the woods and stopped by our fairy village. Two bouquets of flowers rested by the common house, and pinned to a tree nearby there was an orange note. I opened it immediately, excited and curious about what was inside.

Welcome to our woods! I left you some flowers as a welcome gift but you look like you might be away. I hope they are still alive when you return home. Your sweet and welcoming village made me smile. I will stop by again soon!

Your neighbor in the woods

After reading it through a few times, I ran back to the people-sized village to find Ally. We brought the note to the kid’s room in the Common House and began our response. I folded an origami envelope while Ally wrote the letter (her handwriting is only about a billion times neater than mine) responding to the mysterious “neighbor in the woods”. We wrote about how our village wasn’t quite done yet and how we were excited to see other people appreciate our work. We left out a few details, like the not-so-important fact that we are indeed human, and our names. It’s funner not to reveal your identity, right? Ally and I posted the note on the tree, and made a little ladder leading up to it to indicate fairies. Then we waited.

A few days letter, we got a response and another gift. The gift was a hand-made wooden fairy swing that I set up by the Redwood Village playground. The orange note included a poem, and revealed the person’s name as Fiona. We assumed it was a pseudonym, because there’s no Fiona living in our neighborhood. Ally and I hand-felted some mushrooms to give to our amazing note-giver, along with another letter.

The correspondence has continued since then, and this is one of those times that I feel like the luckiest person on earth because I live in cohousing. I can’t imagine anything this magical happening without the awesome friendly neighbors I have. Ally and I await our next response!