What’s it Like to Grow Up in Cohousing? The positives in breaking an arm 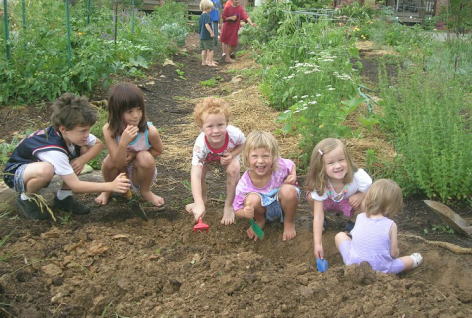 Most people would think that there are no positives in breaking an arm. In cohousing, the decision is more complex.

When I was eight years old, I was having a swinging contest with my neighbor Kaden. I must confess it wasn’t just a swinging contest. It was a jumping off of swings contest. Kaden and I would swing as high as possible on our community playground and then jump off. The person who landed farthest away from the playground won. I had been warned many times not to do this, but I thought that I was as tough as rock and did it anyway.

This time I was determined to win the swing-jumping contest. I swung so high that I was horizontal with the support bar. Then, I jumped. The jump must have looked spectacular; it was what we called a “moon jump”. I guess the jump was spectacular, except for the landing part. I had never really believed that people could feel things in slow motion, but I captured all of the moment mid-jump: the smell of cherry blossoms, the taste of air, the feeling of flight, the sound of Kaden screaming, and the sight of the ground. I landed on wood and (surprise) broke my arm. I began crying and ran back to my house. Three different adults came running and asked if I was okay, but I kept running with one destination. Once at my house, I tried not to cry. I didn’t want to tell my mother what had happened. All I wanted was for someone to read me a story.

It turned out I had broken my humerus, right at the elbow. I needed surgery and three pins. What would follow was the most painful month of my life. Yet the month that followed connected me more to people, and helped me think about the goodness of the people around me.

Once my mom realized (despite my attempts otherwise) that I had broken my arm, she took me to an emergency care center. Since my sister Mia was old enough to be home alone but needed to be comforted, our neighbor Michael took care of her while I was gone. The people at the place jerked around my arm with such carelessness that I was afraid it would fall off. Finally we went home and I eventually got some sleep.

The next day, the cards from my neighbors began arriving. First a card from Michael came and I was delighted. This particular card featured a cat (my favorite animal) and told me to get well soon. I was so happy that Michael had taken care to write to me that I took out my own pencil and stationary. I wrote a card back to him saying how the card helped me so much. That day I stayed home from school and the cards kept coming in from all of my neighbors. I wrote a thank-you card back to every single one of my neighbors, along with little drawings of cats and flowers. Every ten minutes I would get up and run to our mailbox to check for new mail; it was the only thing that kept me distracted from the pain of my arm. The day after my injury I got more than 10 cards! More than half of those cards were yellow (my favorite color) or included cats. I was thrilled.

The day after that I had surgery. The pain was almost unbearable, and what kept me from being absolutely miserable was the consideration and kindness of my neighbors. A few of them carried out whole letter-conversations with me. One nice neighbor even wrote a card to Mia complimenting her on how good a sister she was to me, since he knew I was getting all of the attention. By the time of my recovery, I had a whole wall covered with cards. Some important parts of cohousing are the architecture, the car-free zone, and the common house, but it’s the people that really make it a magical experience.