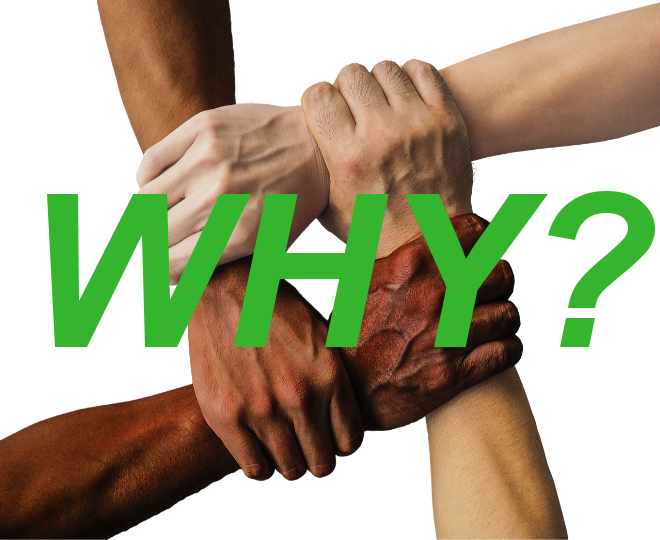 I’ve been in a lot of conversations about race in various ways, and in particular about racism in cohousing. Somewhere amidst all the conversations, it occurred to me to ask a question I haven’t been hearing. Why do communities want to be diverse? Which led to: What do we mean when we say it? and What would it look like if we were?

I’m finding the “Why” question way harder than I would have imagined. Perhaps you will be willing to read along through the evolution of my thinking.

A note to readers of color: I imagine I’m not saying much that you don’t know, and that both the ignorance of the early stages and my sense of my own enlightenment further on display how little I understand of my own privilege. If you feel up to furthering my education, I commit to receiving your thoughts.

Why Diversity, Step One: OF COURSE diversity! How could we not want diversity? Probing that a little deeper, I got curious where that assumption comes from in me and I find I’m not proud of the answer. Of course diversity because I would not want to be like those southern racists who wouldn’t let sweet little Ruby Bridges into a white elementary school. Of course diversity because racism is bad and I learned in school that separate but equal is not equal and all-white spaces are thus bad people, so of course diversity. It’s the simplistic view of a second grader learning about civil rights in an all white history class where we congratulated ourselves on not being those racist kids in the history books. The story is binary and easy. It easily defines me as a “good guy”. It places me in the post-racism illusion that asks nothing of me, and for most of forty years it was the only answer I needed to “Why diversity?”

Step Two: But wait, everyone (or most everyone) in my community is white. What does that say about my ability to do diversity? Ew. That doesn’t feel good. Icky failure. Let’s change the question. It’s really not about diversity. It’s about inclusivity.  It’s about not being like those nasty racists in my history book. It’s not about actually having a mixed community. It’s about not telling black people they can’t come here.  And see! See!  Look!  That black person over there is part of our community, which means we’re inclusive.  Good job us! Inclusive. Whew! I write it as a bit of a caricature, but if I’m honest with myself, I’ve been there. I’ve been very comfortable believing that when I see darker skin I’m just as welcoming as when I see light skin, which is probably mostly true, and that this is enough, which is very clearly not. I’m answering the question within my comfort zone rather than using it to stretch.

Step Three: Why aren’t BIPOC folks joining us? The comfortable answer: maybe they get enough community where they are and don’t really need cohousing. Also, I live in a place where most people are white. Stretching a bit into uncomfortable truth: It’s not really a race problem, it’s an affordability problem that aligns with race. And the escape back into the comfort zone: Affordability is hard and it would take too much time or cost too much money and we just can’t do that. Turns out it is easy to come up with reasons why NOT diversity, that isn’t what I meant. The simple binary question is slipping away and this is getting harder.

Step Four: Muddled, overwhelming complexity. Do “they” even want to live with us? Is it bad if they don’t? What is diversity worth to me? Would I pay to make a unit accessible to a person of color? Are we even allowed to specify like that? What about Fair Housing? How would that work? How would we choose? Are we just asking someone to be a token?  How many does it take to be diverse? Are we just talking race? Or is income enough? Or is it LGBTQ? Or ability diversity? What is the good thing now? Can we do it and still get this thing built?

Step Five: What is diversity?  Diversity is bigger than any of us, and maybe that’s the point. Diversity in cohousing means different people living together. The most visible differences are color, but there are others too. There’s a piece of this that my white, privileged second grade history lesson did not prepare me for, the piece where being colorblind is not only insufficient, but actually ineffective and even harmful. Diversity doesn’t just mean people who look different, it means people who are different. Diversity means people who value different things, communicate in different ways, who think differently. Diversity, for me as a person who grew up with most every sort of privilege there is in our society, means relinquishing my right to assume anything about other people. It means being willing to discover them for who they are and meet them there. If I’m lucky, they will be willing to meet me too, though the truth is, in a lot of ways I’m a lot like the white world they have had no choice but to move through their whole lives. They already have a pretty good idea of our differences. I don’t, which means diversity, for me, means being willing to learn, a lot, about things I don’t even know that I don’t know.

Step Six: Deep breath. Let that sink in. Diversity is hard. Hard for me as I learn to drop my privilege. Hard for others as I keep not noticing my privilege and they end up pointing it out. Hard as we all get tired of that conversation long before we’re done needing to have it. Hard because shifting from a dominance-based, privilege-affirming culture to one that values all the parts of everyone means a LOT of change. Mindset change, thinking change, behavior change. This is going to be hard.

Step Seven: Then why should I do it? OK, this one is so easy, I almost didn’t include it, but I think it needs to be said. I should do it because justice is a real thing and we aren’t there yet. I should do it because I don’t deserve my privilege and others don’t deserve their lack of it and as much as my mother was right when she said, “Life isn’t fair.” I haven’t stopped believing that it should  be, at least in that systemic and cultural oppression has got to stop. (Fair is a whole other thing, we could talk about another day.) So absolutely yes, living my values does mean striving for diversity, getting really real about why I don’t live that way and serious about changing the things about me that bring it about. Even with my new understanding of how very hard it is, I should do it.  But that doesn’t yet answer the question I started with.

Step Eight: Why diversity? I know that I should, but why would I want to? It’s the same reason I would want to do any hard thing: Because hard things are where growth happens. Growth and diversity occupy an overlapping space – the space where I put down the things that keep me safe, and embrace the vulnerability of something new and often frightening. I want to be with people who are different than me because it is in butting up against those differences that I discover parts of me that are ready to grow. I want to live in a diverse community because I haven’t yet become the person I aspire to be.  I don’t want to live safely within a comfort zone that leaves me happily ignoring the ways I fall short of living my values. I know I won’t go out and find that learning on my own. I need a community to challenge me. I need to be surrounded by wonderful models, rich resources, and the conflict that comes of differences.

Choosing diversity isn’t about protecting the Ruby Bridges’ of our world from hatred. That’s far too low a bar. Worse, it carries the frame that the privileged are somehow in charge of the oppressed, that the only story that matters is what whites are doing.  My reasons for choosing diversity are the opposite. It is all about the gifts we all receive when the hierarchy fades, sharing begins and growth leads the day. It’s about the part of the story my second grade teacher didn’t know, but which I believe must have been true: The part where Ruby gifted those white kids with new perspectives and different ways of thinking. Where the really hard thing that should never have been asked of her, brought growth to others that was long overdue.  At it’s best, diversity is what happens when the privileged figure out how to set down their privilege and open themselves to learning in ways that allow everyone to arrive without fear of violence, judgement and hurt.

I think the cohousing world has a long way to go before we are ready to embrace the fullness of what diversity could offer us. I think we’re moving in that direction. I think we have a lot left to learn about how to get here. More importantly, I have a long way to go.