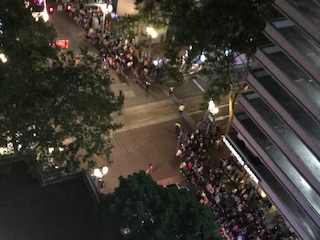 Another failure, unless, of course…

You really ENJOYED having to make choices – choices I tell you! – among 5 bus tours, 24 +/- Pre-Conf. intensives and workshops, 60+ waaay too awesome conference workshops, three plenary speakers plus one closing panel made up of 6 well versed, knowledgeable speakers/resource people.  What were they thinking?  But if you had to uphold or upgrade your Cohousing Cred then you had to suck it up and do the conference.

I had to take a pill.

Aside:  I’d just like to say expecting people to be up, dressed, fed and at the bus tour collection spot by 7:45 AM is really not nice.  This start time was only exceeded by Yoga at 6 AM on Sat. & Sun.  I didn’t make either of those sessions.

You LIVE for Guerrilla Networking.  How to work your way through 564 attendees including 108 “foreigners” (Are there cohousing “foreigners” or only cohousers who find sites in their home spaces?) from 124 coho communities.  Everyone seeking, building or living in cohousing.  In case your Guerrilla needed a networking challenge there was a session on Speed Networking – like Speed Dating w/out the awkwardness or the cost.

I had to take another pill.

You felt COMPELLED to eat all the good gastronomy both at the conference venue and in the many fab restaurants in Portland. I sacrificed myself to set a good example for newbie conference attendees.   Well, somebody had to do it.

I took up drinking.

You attended THE PARADE.  O yeah.  They gave us a parade.  It happened to coincide w/ Portland’s annual Starlight parade.  But it was definitely for us because they held it on Saturday night after the conference closed for the day and everyone was finished w/ dinner. And it went right by the conference hotel so you could be outside on the sidewalk or watching from your hotel room or other spots in the hotel.  Definitely held for us.

I did a Happy Dance.

You DECOMPRESSED by attending Katie McCamant’s session “Unplugged.”  The perfect close to a wild and wooly conference.

I was deeply moved.

I am deeply grateful.