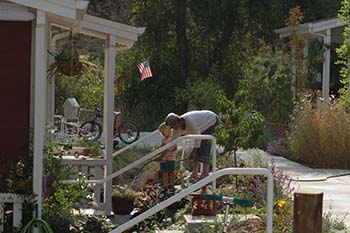 It’s safe to say that water is on the minds of most Californians. With our state facing a historic four-year drought, the effects ripple far beyond our own cities, dinner plates and favorite swimming holes. It’s easy to feel overwhelmed by the consequences.

Earlier this week, Governor Jerry Brown issued California’s first-ever mandatory water restrictions, calling for a 25% reduction in use. This mandate focuses on urban use; installing drought-tolerant landscaping, creating rebates for efficient appliances, stricter standards for new developments, etc. “The water savings are expected to amount to 1.5 million acre-feet of water over the next nine months.”

Now those are some big numbers.

Here in the Sierra Foothills at Nevada City Cohousing, residents can measure their water usage and conservation at a community level. CoHousing Solutions’ President Katie McCamant, who was the developer and lives there herself, relayed her experience with water mindfulness at a recent community meeting.

Reviewed during the meeting, water meter data shows that Nevada City Cohousing residents use half the water of the average California household. Yet even with that great news – a true community success story – a good portion of the meeting was spent brainstorming additional ways to conserve water. “Living in community allows for these dialogues,” she says.

Feeding off each others’ concerns and ideas leads to innovative solutions, a collective consciousness that inspires even bolder actions. Take, for example, the low-flow shower heads at Nevada City Cohousing. Though already installed as the standard, a community member brought an even lower flow model he’d found to the group. It was agreed he’d install it in the community pool shower for everyone to test out and decide about adoption from there.

As we face increasing resource challenges, it’s comforting to see the consequences of living mindfully in community. We’ll raise a water glass (and drink every drop) to that!