What does it feel like to move into a cohousing home you’ve been building for years? 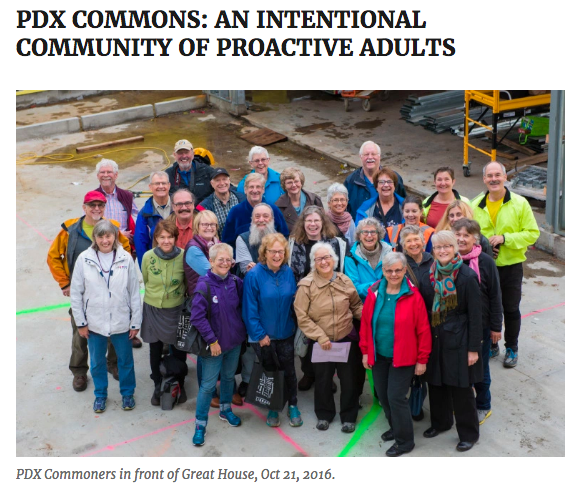 On moving day. What does it feel like to move into a cohousing home you’ve been building for years? Exciting! The movers were friendly and right on time and carried all my boxes and furniture down three flights of stairs to the waiting truck. As the rental apartment I was leaving slowly emptied out, I had worried that I might feel sad to leave, but instead I was giddy with anticipation. When I arrived in my car at my new home, there was small group of cohousing friends there to greet me with open arms, feed me snacks, hold the front doors open, and watch the movers unpacking my belongings! My movers pulled up and I was officially moving in. We learned that the elevator was on emergency power due to a partial power outage at our new building, but at least it was working, unlike the day before.

I climbed the three sets of stairs to my apartment and was happy to note it was very doable (the three sets of stairs)! Having lived in a second-floor walk-up with another flight up to my loft bedroom for the previous year had gotten me prepared for climbing the stairs. I walked into my new space–so clean and well-lighted by natural light.

For over a year I was worried because no one else seemed to want the units in my “stack” with the same exact floor plan on the first and third floors, but once I moved in, I decided that I had one of the lightest apartments in the building—which had been my dream!

My first afternoon was full of wondering about things like “how do those fancy electronic air/heat units work?” So many gadgets, so little instinct for working them. Friendly warm faces and hugs wherever I turned—yes, this was really happening! Lots of “Did you spend the night here? When are you moving?” Even though the electricity in my unit was not working, others gladly shared their working refrigerators for my food. No one’s door was locked, so it was easy to get in and out of each other’s homes.

I feared my space was filling up with boxes faster than I could figure out where to place them. Now the couch was being put together and the rug thrown down. Soon I was paying the movers and trying to decide if I had the energy to join others in a trek to a nearby park to see a classical symphony concert. Well, the walk would do me good and I was anxious to see how far the closest park was. Passed many neighborhood homes – wow I really was moving into a residential walking area so different than last year of downtown living at the river’s edge. Look at those beautiful old homes and friendly people gardening in their front yards. Cohousers had saved a spot way up front and park was luscious with green vegetation.

After the concert, I met a friend for dinner at the barbecue restaurant next door to our building–- how easy and good! Greeting my neighbors for the first time… Back to a discussion of electrical issues. And now melting ice from the refrigerator in the Great Room created a puddle that needed towels for clean up. It felt unreal, but fun. More folks moving in, more hugs and good wishes; different greeters this time, each with a welcoming smile. Ok, someone parked in my assigned space, no problem; still plenty of other empty spaces to choose from. Electricity was still off as it started to get dark–-candlelights flashlight, now where did I pack those? Oh yeah, there’s a flashlight on my phone but I used it gingerly, as I didn’t have a set-up yet to recharge my phone. Wow, as I passed another home on my floor, I saw that I could see right in to the living unit, and they could see me. Does this mean I can’t run naked in my home, unless I close the curtains?

Exhaustion was starting to set in, but I needed to check out my new tub. Ah, first time filling the tub—it took a while for the water to warm up but when it did the tub was a perfect fit for me, with a fancy new shower hose. So many new and exciting feelings; doing everything for the first time; understanding it will never feel like thus again!

Three Days Later. What does it mean to live in community? My experience thus far is that a hand goes out to help before you even know you need it. Folks are there to hold the door. And we have needed each other to get through the unanticipated issues with a brand-new building.

Last night was a good example. It’s been only three days but already the elevator has stopped working six times, the front door would not open, the garage door woudn’t close. Somebody else’s movers (were they stoned?) were dropping furniture where ever. As it was getting later in the evening, one couple’s furniture was still in the lobby hall way. They needed help and help we provided. One household, already moved in, volunteered their guest room for sleeping: there was no time to think about the “rules of engagement;” this couple needed someplace to sleep and their king-size bed was not going to make it three flights of stairs that night. Other cohousing residents made up the bed — who knew we had such nice sheets and quilts? Still more went to fix a food tray. What no pillows? This is easily solved– here are some extras. I found myself carrying boxes and bags across the hallway. Oh, a phone need to charging– someone had the right plug! A lift home was needed for one last moving run; co-housers jumped into action. Comfort and hugs are needed more than ever, and are offered and received.

At our first pot luck, we shared a favorite ritual of mine, taking three deep breathes and saying “I’m happy to be alive sharing this meal with you.” We shared some of our first feelings about living in community and there were mostly all happy stories, despite many of the hassles of moving. You could see it in everyone’s face–a sense of comfort and joy that our dream of living together was finally coming true!

Caveat: We had a number of delays in moving in and some of us were without a place to stay or soon would need to move. The builders/development committee let us move in after our certificate of occupancy but before the building was completely finished, which may explain some of the challenges we faced this first week. Just a heads-up for future cohousing projects.