Your Cohousing Community and Sex Offenders

Many communities wonder about protecting community members, especially children from sex offenders. While some members feel strongly that background checks should be used, others object to relying on the criminal justice system (which many view as racist and unfair) as a source of information.  Read on for a detailed explanation of what a background check will and won’t tell you about prospective member as well as concrete steps a community can take to protect children.

Graham was raised by a single mother who died of a drug overdose when he was 11 years old. He went to live with his aunt, who worked two jobs to support herself, Graham, and her two daughters, ages 7 and 9. Graham grew up in a household with little emotional warmth and inadequate adult supervision. When he was 13 years old, curious about sex, he molested the female cousins he lived with by touching their breasts. He was incarcerated in a youth facility until age 21, where he engaged in treatment about his offending. Now age 25, he is married with a 2-year-old daughter.

Mike was an active college student. He was involved in classes, sports, and extracurricular activities. He drank too much on the weekends occasionally, but he had never been in trouble with the law. One weekend, he met a girl at a party, and they hit it off and began dating. She was in high school, but she seemed very mature for her age. Mike had heard about some “3-year rule,” but he was pretty sure it didn’t apply to his situation. The girl got pregnant. Mike was arrested for molesting an underage female.

Joe realized as a young adult that he had an attraction toward children as well as toward adults. His attraction to children caused him distress and shame, but there was no one to talk to about it so he kept it very secret. When his sister asked him to babysit his 9-year-old niece, he wanted to help. His curiosity and arousal led to him touching his niece’s genitals while giving her a bath. He was arrested for sexually abusing his niece.

Brad has a long and varied criminal history, including burglaries, assaults, and domestic violence convictions. He also has an alcohol addiction. Brad does not have the emotional ability to “walk in another’s shoes,” and his lack of empathy has resulted in a many failed relationships. Recently, he met a woman at a bar, and what began as consensual sexual activity turned into Brad raping the woman. He was arrested for sexual abuse of a stranger.

What do these men have in common? They are all convicted sex offenders in Oregon. All are required to complete sex offender treatment while they are on probation or parole. But, as is obvious, their route to the “sex offender” status was very different. If there is one take-home lesson about sexual offenders, it is this: They are individuals, and one size does not fit all.

Say the words “sex offender” to most people, and they will immediately imagine a creepy man in a van with a bag of candy, or a weirdo at a park jumping out of the bushes with his pants down. If only this were true! It would be so much easier to identify dangerous people, set helpful policies, and create safety in our communities! Instead, most sex offenders look like a friendly neighbor, Uncle Howie, a charming date, or your stepfather. They are seldom strangers. Take a look at this chart, based on current research, about men who commit offenses against children. (Women also commit sex offenses, but at a much lower rate.) 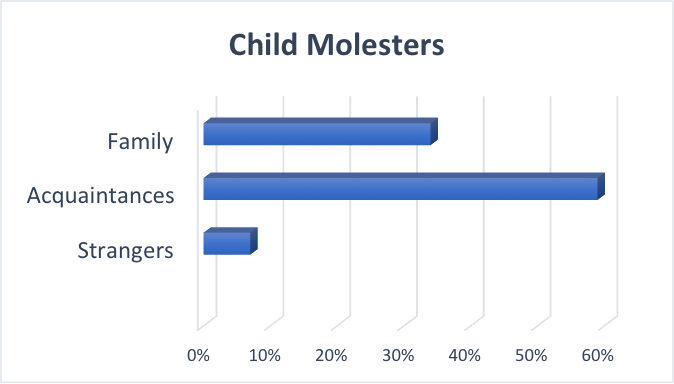 As you can see, 93% of child molesters are known to the victim and to the victim’s family—they are acquaintances and family members. An emphasis on “stranger danger” is misleading and unhelpful in preventing abuse in the majority of cases.

How is a sex offender different than you or me?

Primarily he is different because he has sexually offended against someone. In every other way, most people who commit sexual offenses are more like you than unlike you. They have jobs, families, hobbies, hopes, fears, and, oftentimes, considerable remorse for the crime they committed and the people they hurt. They often value community, love, and social connections, just like the rest of us. In fact, one of the best predictors of non-recidivism (not offending again) is the development of “prosocial” networks that are positive, helpful, and intended to promote social acceptance and friendship. Developing a prosocial support network is a foundation of sex offender treatment.

How can your cohousing community respond to sex offenders?

Most people believe that every sex offender is dangerous and likely to reoffend. This is patently untrue. Most convicted sex offenders will not reoffend. Sex offenders who successfully complete a sex offender treatment program reduce their risk of reoffending even more.

Sex offenders in most states are assessed for their risk of reoffending with the following risk categories: High, Medium-High, Medium-Low, and Low.

Brad, from the example above, who raped a woman he met at a bar, is a High risk offender. Only 8% of sex offenders are High risk. They have an extensive criminal lifestyle and thinking pattern; they are oftentimes psychopathic; and their crimes tend to be violent and often against strangers. Their assaults are the stuff of the headlines by which all offenders are judged. They are difficult to treat. The 8% of sex offenders who are considered high-risk have a 35% recidivism rate.

Cohousing communities should screen these High risk offenders out of their communities by using criminal background checks.

About 20% of sex offenders carry a Medium-High risk. They often have substance abuse issues, little social support, some criminal history like theft or nonviolent offenses, and less lifestyle stability. Their recidivism rate is 21%.

Approximately 72% of convicted sex offenders are considered Medium-Low or Low risk. These offenders have a less than 10% recidivism rate. These are the men who are most likely to be interested in living in a cohousing setting.

Which brings us to the big question each cohousing community must answer:

Should sex offenders be welcome to live in this cohousing community?

Obviously, each community will have to determine their priorities and conditions for participation. If your cohousing community decides that it wants to be open to supporting the rehabilitation of Low Risk, or Medium-Low Risk sex offenders, the community should write up policy guidelines.

What should we consider when writing up policy guidelines?

In Oregon, anyone convicted of a sexual offense has been classified in as Level I, II and III (low, moderate, high). They will have a letter indicating their classification. A criminal background check will also indicate their risk level. It would be inadvisable to accept any high-risk offenders into a cooperative living situation.

We recommend that cohousing communities work with a certified treatment provider specializing in sex offending to create policies about including sex offenders in their communities. You can find a professional to work with at atsa.com, the Association for the Treatment of Sexual Abusers.

A basic policy could include having every member agree to a criminal background check that looks only for sexual offenses. You would get a yes or no answer back from the FBI or State. Yes, the person has been convicted of a sexual offense, or no, they have not.

If they have been convicted, they can request a sealed copy of their criminal record and bring it to an ad hoc committee formed to decide on their potential to be safe in your cohousing community. While many people who have been convicted of sex offenses can be safe, this committee would do well to work with a sex offender treatment professional in making this decision.

If someone has a conviction for a sexual offense against a child and wants to be a member of an adult or senior cohousing community, knowing their criminal and treatment history will help keep children who live in or visit the community safe.

If a potential member of your cohousing community will not agree to a criminal background check, it may be best to consider them unsafe around children.