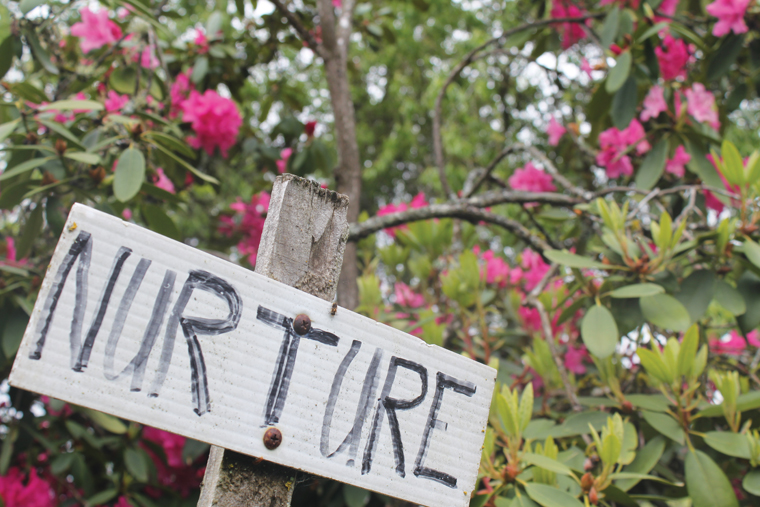 “I want to do something about climate change,” my 12-year-old daughter insisted. The immediacy of her feelings, and her earnest belief that she, personally, could do something momentous left me momentarily speechless. I remember that same urgency in myself as a teenager, before I realized the complexity of the problems facing us. Nevertheless, I have not stopped doing my part to solve those problems.

“We are doing something,” I responded. “We’re planting trees, growing food, and living in community.”

My daughter shrugged me off. This is just her life, nothing unusual. She wants to do something more to address climate change.

But for many people, our life is unusual. Here’s how those three actions specifically help mitigate climate change.

Many people realize that planting trees sequesters atmospheric carbon. Trees inhale carbon dioxide, break it apart, use the carbon to build their body tissues, and exhale the oxygen (dioxide means two oxygen atoms). Besides reducing atmospheric carbon dioxide, trees and forests have several other beneficial effects on local climate, including the water cycle. Trees can prevent and mitigate drought, improve water quality, provide habitat for wildlife, and increase soil health. These are all important factors in mitigating catastrophic global climate trends. Here are some ways Heart-Culture (my community outside Eugene, Oregon) manages trees in response to climate change.

(1) Plant more trees. At Heart-Culture, we are planting hundreds of trees as hedgerows and in food forests.

2) Heat with wood. This might seem counterintuitive, but wood can be a carbon-neutral way to heat a home, because the amount of carbon released into the atmosphere is equal to the amount the tree removed from the atmosphere during its lifetime. Fossil fuels (the source of electrical heating in most areas) can never be carbon-neutral. To make wood heat sustainable, use coppice systems, plant trees at the same rate that you are harvesting them, and/or don’t harvest more than the annual growth increment from your woods. Use the most fuel-efficient stove you can afford in order to burn less wood.

(3) Manage trees with coppice systems. Coppicing is a traditional form of silviculture in temperate regions with adequate rainfall. Basically it involves cutting a tree down, with the intention that it will grow back from the stump (called a stool). Coppiced trees grow much faster than a new tree seedling, because the mature root system remains underground. Coppiced trees can be used to produce firewood, fencing, tool handles, trellises, construction poles, and pretty much anything else you want to make out of wood. Several oak and ash trees volunteered on the edge of my garden, where they would eventually shade out my vegetable patch. Instead of removing them, I started an annual coppice rotation. Now I have a source for garden stakes and kindling that sequesters carbon and will never grow more than eight feet tall.

(4) Brush Piles: Like most of our rural neighbors, we gather brush from landscape maintenance into a pile which we periodically burned. As our thinking about climate change evolved, it dawned on us that we were adding carbon to the atmosphere unnecessarily. Not only that, but we always saw insects, snakes, and birds fleeing for their lives when we burned the pile. Countless beneficial creatures must have died in those flames. We no longer burn the pile; we maintain it as beneficial insect and snake habitat. This means we have a large pile of brush and blackberry canes slowly rotting down near the garden. We keep adding to it, and it keeps rotting down. Instead of escaping into the atmosphere, the carbon is incorporated into the bodies of life forms and into the soil itself.

Growing food in your own yard means that no fossil fuels are used to transport it to you. This is especially true if you save seed, grow fertility on-site with animals and fertility crops, and preserve the harvest for year-round use. My daughter sees me in the garden every day, feeding livestock, planting and harvesting, and preserving the harvest.

Hundreds of pounds of apples and squash arrived in our kitchen in a wheelbarrow this week. There are no stickers or rubber bands on this food. No plastic bags. No waxed cardboard boxes. The only gasoline required was to transport the trees to the farm 20 years ago, and the seed packet arrived in the mail. Next year my squash seed will be saved from this year’s harvest, so I can honestly claim a 100 percent fossil-fuel-free squash harvest.

Permaculture gardening methods have a special place in carbon sequestration, not only because perennial plants act as carbon sinks, but also because the gardeners’ management activities are less likely to rely on fossil fuel inputs. Permaculture orchards don’t need to be tilled, sprayed, or mowed. We use geese and sheep to mow in the orchards. Chickens and ducks eat harmful insect pests. All these animals fertilize the trees with their manure. We attract beneficial insects and pollinators with guild plantings of flowers and herbs, as well as hedgerow trees that support several hundred species of butterfly and moth larvae. Songbirds build nests in the hedges, and feed those caterpillars to their babies.

When we grow gardens that provide yields for other species, not just ourselves, we increase the value of our gardens’ ecological services. As environmentalist author Gene Logsdon pointed out, saving an endangered species like the blue whale requires international cooperation; saving an endangered insect species can be accomplished in a single backyard by the attentions of a single gardener. This is even more important in the face of climate-change related ecological collapse. Our gardens could reasonably become islands of safety for wildlife as well as essential food-production areas for ourselves.

At Heart-Culture, we have old appliances. My cookstove is an ancient 1950s electric Frigidaire. Two burners no longer work, but we will keep using it for as long as possible, at which point we will replace it with the most efficient stove we can find. Since half of any appliance’s fossil fuel use is embodied in its creation, any time a group of people share an appliance, they effectively avoid the large fossil fuel use of creating more. This is especially true when appliances are maintained and repaired for use beyond their expected lifespans.

Two other families at Heart-Culture use my stove for large baking projects, because they have only kitchenettes in their tiny homes. We have four stoves, three clothes washers, and three showers on the land; these are currently shared among six families and five single adults. In a culture that expects each family and each single person to have their own one (or more) of everything, we are forgoing the use of seven stoves, nine washers, and nine showers.

Our infrastructure is set up to support this choice by incorporating the use of tiny homes. Very small houses, these structures are less than 200 square feet each; some are only 80 square feet. A tiny home often acts as a detached bedroom, with one of the larger buildings as a support house for bathroom, kitchen, and living areas. The distance from their support house encourages residents to create outdoor living spaces with gardens, trellises, fire-pits, and solar showers. This increased connection with outdoor spaces definitely leads to greater awareness of the weather, and plants the seed for a different view of our own place in nature.

Embodied energy is a factor in building construction as well as appliances: how much fossil fuel use is needed to create the new structure and its components? Tiny homes use fewer resources during construction, which makes it easier to incorporate used and foraged materials available locally. They require less energy to heat and cool, especially if they are well insulated. It’s easier to spend the extra money on better insulation when you need so little of it.

In most cases a tiny home seems too small for a wood stove, but even with electric heat they can be very efficient. I lived with my toddler for nearly two years in an eight-foot dome with six-inch foam insulation. We used a tiny electric heater for 10 minutes on winter evenings, and snuggled under thick blankets to sleep. In the morning the entire home felt warm from our body heat. This was in Eugene, which is USDA Zone 8b, but even for our climate it was a very small amount of heating. Our support house was heated with a wood stove.

Climate justice is social justice. People of color, women, children, indigenous communities, and the poor are more severely affected by climate change because of lack of access to resources (including privilege) that would allow them to avoid personally suffering. Impoverished people cannot afford to rebuild lives devastated by drought, severe storms, and other climate disasters. They often live in areas more likely to be adversely affected by climate change, like flood plains. Federal funds intended to help homeowners rebuild after disasters don’t help those who are too poor to own homes.

Tiny houses in intentional community can have another impact on climate change: addressing economic injustice by providing stable low-income housing. Many intentional communities are most accessible to educated white middle-class people, who have the knowledge and resources to seek out sustainable lifestyles. Like most other communities, Heart-Culture was founded by college-educated white affluent people. Over time, however, social justice has become a large part of our mission.

All our residents have access to 33 acres of community land, with barns, pasture, garden space, and woodworking shop. We live in a social environment which supports and encourages projects like sustainable gardening and resource cycling. For some residents, this is their first experience with interpersonal skills like mediation, consensus, and radical parenting. Others are well-versed in the “liberal” arts, but are learning for the first time about social justice, food-quality inequity, and white privilege.

In terms of being a climate revolutionary, my child is right that we have far to go. We drive cars, depend on the nearby city of Eugene for our residents’ incomes, and draw from the grid to power lights and appliances. However, we continually seek ways to bring our lifestyle into alignment with our values and with the survival needs of all life on this planet. My next project is to transition our entire community away from its aging septic systems and into constructed wetlands greywater treatment. I’m sure my daughter will help dig the ponds, and maybe I can articulate for her some of the reasons our new greywater system addresses climate change.

I’m actually glad my daughter shrugs off our revolutionary lifestyle as “just normal.” It means she has a more empowered base to work from, and can reach further towards the goal of truly sustainable human settlements. It may turn out that raising children in community is my most effective form of climate justice activism. These kids will be able to see horizons that I cannot even imagine. I’m looking forward to following their lead.

All statistics for Oregon come from the US Census Bureau.

Kara Huntermoon is an owner-member at Heart-Culture Farm Community in Eugene, Oregon, where she raises kids and grows food. Her family of four earns $20,000 per year and eats half their diet year-’round from their own garden. She can be contacted through the Intentional Communities website, ic.org.