Liz’s interest in how and where people make homes for themselves and their families began more than 50 years ago with cooperative dorms at Oberlin College.  Later, as a young Legal Services lawyer in Silicon Valley she represented low income clients facing loss of their homes and watched as, almost overnight, almond and cherry orchards turned to “little boxes on the hillside” as land values soared.  In the first years of their life together Liz and her husband lived in what would now be called co-living and thus, after almost four decades of raising four sons in a single family home in a small Vermont village, it was natural, when they started thinking about alternatives to retirement communities, to conclude that cohousing could provide a solution.

She is a founding member of the Pinnacle Project, an LLC formed to develop cohousing in the Upper (Connecticut) River Valley, near Dartmouth College. She is also an active manager of Loch Lyme Lodge, an almost century-old cabin-based hospitality business located on the 120 rural acres where Pinnacle cohousing will be built.

Liz looks forward to service on the CoHo/US Board, helping to make cohousing a sustainable, energy efficient alternative for mixed income housing across the Americas and beyond. 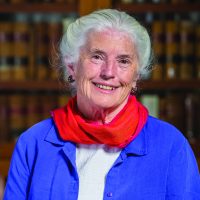